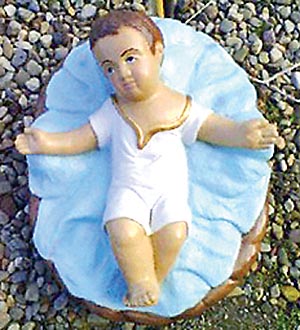 Baby Jesus is back in Allenhurst after the statue, stolen from the borough’s annual Christmas Nativity scene in 2012, was anonymously returned last week.

“It is really an invaluable item and it was returned in good condition,” Police Captain Michael Schneider said.

The concrete figure, weighing about 150 to 200 pounds, was reported stolen from the Nativity scene on Allenhurst’s Main Street in early January. It was reportedly last seen on Dec. 26.

After the statue was discovered missing, police issued a statement saying they would accept anonymous tips as to the whereabouts of the figure and that they hoped those responsible will “do the right thing” and return the item.

“It may have been some type of prank or a bunch of college kids – and they really could have just gotten rid of it. But they made the right decision,” Schneider said.

Police Chief Robert C. Richter received a letter last week, from a North Jersey lawyer, indicating he had been retained to return the Baby Jesus with “no questions asked” – as was stated previously by the police department.

Police said previously that they were prepared to prosecute any and all people involved if the figure is not returned.

According to the letter, the attorney stated it was “a stupid, isolated prank by teenagers who did not intend to keep the figure, but did not know how to return it.”

The statue was delivered to the borough last week by the attorney.

“On behalf of my client and his parents, I wish to offer my extreme apologies to you and the municipality,” the letter said.

“It is our understanding that the parents took care of the appropriate discipline in this matter,” Schneider said.

As to what made the pranksters feel guilty enough to return the statue, Schneider says he’s not sure.

“It was in The Coaster and a lot of people were talking about it. Maybe some parents eventually saw the statue. I just don’t know,” he said.

But Schneider said the Nativity scene is complete again and will continue a long-time Allenhurst tradition.

“We are looking at different measures to now secure the park area,” he said.

Schneider said that had the original Baby Jesus not been returned, then the entire Nativity scene would have had to have been replaced.

“I thought we would never see this statue again. You cannot buy a replacement because they are not available, meaning we would have to buy the entire Nativity scene again,” he said.