The B Plot: ‘Sandye’ beach day in Allenhurst

by The Coaster Editorial Staff
in Allenhurst

More than 1500 people came out on an overcast beach Sunday to watch the 70-year-long tradition of dying the ocean water neon green at the Allenhurst
Beach Club.

The “Sandye” commemorates the end of the official summer season.

“In 1943, the owner of BubbleLand in Asbury Park celebrated the one year birthday of his daughter by pouring green water into Wesley Lake,” said Rutledge Varley, assistant manager, Allenhurst Beach Club. “And so the tradition was born.”

Ultimately, the tradition moved to Allenhurst under the passionate guidance of resident Freddie Lehmann. Today, his son Jack continues to oversee the dyeing of the ocean bright green.

“Some say it is good luck to dip in the green water,” said Jack Lehmann.

“Really, it is just a fun, community thing to do. Whatever reason people have, the goal is to make kids and adults happy.”

Even when Lehmann found himself working on the other side of the country for five years, it was important for him to continue the wonderful beach tradition.

“I always made sure to be here on Labor Day weekend,” said Lehmann. “I remember how much fun I had with my friends as kids in the green water. It is important to me to make sure those memories are there for the kids today.”

The ceremony begins with a bagpiper walking south on Ocean Avenue, down the cement stairs to the beach and north to the jetty between Allenhurst and Deal. With each step, the bagpiper – like a modern-day Pied Piper – finds more children following him.

“This is my favorite gig of the year,” said Rich Mayo of Red Bank, who has served as the official bagpiper for the last five years. “I don’t care about the heat or the sand, it is so great to see everyone so happy and the kids running around.”

After careful examination of currents, wind and waves, three large vats of dye are sprinkled 125 feet off the shoreline to the delight of children of all ages. The bright green dye is approved by the Environmental Protection Agency and used by the Coast Guard during oil spill containment drills. The dye is also found in marine emergency kits and in many lifejackets.

As the dye permeates the water and moves to shore, children run to bottle the water challenging each other to “get the greenest water.” Adults dive and dip into the neon waves hitting the jetty that is crowned by a flowing American flag honoring and commemorating local loved ones.

“The Jersey Shore is changing a lot,” said Lehmann. “Dyeing the ocean is one constant that we hope that people who have lived here for decades, as well as new locals, will look forward to every year.”

I absolutely love the traditions of this area. 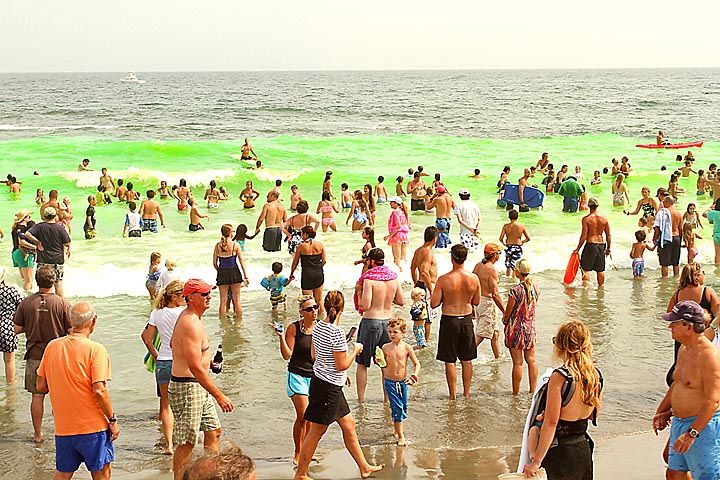