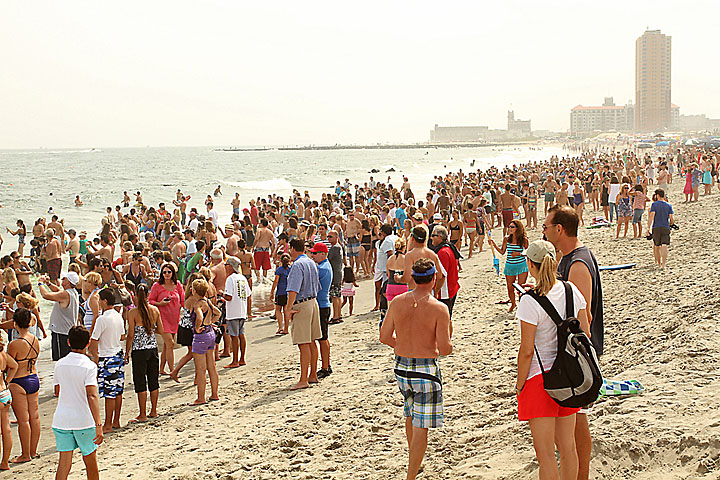 For the Shore, it was a summer season to remember.

The Summer of 2013 – post-Superstorm Sandy which flooded houses and businesses, ripped up boardwalks and set off a massive recovery effort. An effort that extended into the traditional summer season of Memorial Day to Labor Day.

“I think we did all right, considering,” said Thomas A. Arnone, director of the Monmouth County Board of Freeholders and a Neptune City resident. “A lot of things came into play.”

Of course, there was the recovery from October’s Supertorm Sandy. But Arnone also mentioned the longer school year, because of Sandy, on people’s minds and weather that ranged from extremely hot to rainy to cloudy to cool.

“In general, (the Shore was) probably down a little,” Arnone said. “But a lot of things beside the storm came into effect.”

Renee Walsh, 41, of Ocean Township ranked the summer in general a 7 out of 10. She blamed the combination of kids being kept in school longer to make up for lost time from Sandy and the fickle weather

“I just felt it was short overall and the weather wasn’t nice overall,” Walsh said.

But Walsh’s friend owns a restaurant, Sea Grass in Ocean Grove, and “the restaurant definitely seems to have more traffic.”

“We had another banner year,” Giberson said. “You can see we’re gaining momentum.

Asbury Park had an estimated 130,000 paid visitors on the beach, he said.

“We thought we would do well, because Asbury Park is becoming a destination,” said Giberson, citing such attractions as the beach, restaurants and entertainment. “All these amenities are synergistic with each other.”

“We were very fortunate to have a good season,” Giberson said.

Another positive for towns such as Asbury Park, “we didn’t sustain the damage” of Superstorm Sandy that other towns did, Giberson said.

“We looked like a town that was ready to roll Memorial Day,” said Bradley Beach Mayor Gary Engelstad. “We got a steady stream of people (tourists).”

But was Engelstad surprised by Bradley Beach’s success?

“We took last year’s numbers and assumed we’d do less than that,” said Engelstad, explaining how the town projected a $20,000 decline in badge revenue from 2012 to 2013.

About six months back, the Ocean Grove Camp Meeting Association set a goal of $1.5 million that included refurbishment to the boardwalk and the Great Auditorium roof, both damaged by Sandy, said Ralph del Campo, the association’s chief operating officer. The association contributed $425,000 and the public $875,000 for a total of $1.3 million so far, del Campo said.

In Ocean Grove, beach traffic was down about 10 percent and Great Auditorium entertainment audiences down about 5 percent, while worship services attendance was the “same (to) slightly above it,” del Campo said.

The weather played an interesting role this summer. On one hand, the Memorial Day weekend started off bad and there were days of rain, cooler temperatures and extreme heat — all of which were pointed out as negatives. On the other hand, overall, the weather was fine.

“In general, it was a very good summer (weather-wise),” said state climatologist David Robinson. “For the most part, it could have been a lot worse if we had cool, rainy weekends or just (rainy) washouts. We didn’t have a washout weekend.”

Again, overall versus specific, the timing of the weather was everything.

Arnone said there was a run of cloudy days on weekends.

“You cannot lose a weekend because of the weather,” Arnone said. “It was pretty much every weekend.”

But Robinson said, “sometimes, a cloudy day isn’t frowned upon by people who have concessions on the boardwalk.”

Yes, the Memorial Day Weekend was cool, only with high temperatures of 60 to 72 degrees and a windy Saturday, Robinson said. But it was also an early Memorial Day, May 27 — early, too, in the sense that vacations could not start for weeks because of extended school years caused by Sandy.

“I don’t think it soured people for the rest of the summer,” Robinson said.

In 119 years of weather records in New Jersey, there have been only 10 warmer summers, Robinson said. July, for example, was the fifth warmest July on record — with a statewide average temperature of 78.2 degrees, or 3.2 degrees above normal, Robinson said.

But, aside from “a couple of hot spells in July,” with temperatures in the middle to upper 90s, the overall summer was not extremely hot, Robinson said.

It was the second wettest summer, only beaten by the summer of 2011, Robinson said.

June was the wettest on record — with a normal June having 4.02 inches of rain, but this June having a statewide average of 9.57 inches, and, locally, Sea Girt coming in with 10.74 inches, Robinson said.

“It was over twice (the rainfall average),” Robinson said. “But most of that fell during the weekdays. It didn’t rain that much on weekends.”

Things calmed in July — 4.52 inches being normal statewide, this July’s statewide average being 5.84 inches and Sea Girt having 4.62 inches.

August, according to Robinson, had “quite average precipitation”: 4.21 inches being the average statewide, this year being 4.49 statewide and 5.23 in Sea Girt. Also, August — the 37th coolest on record — had no 90-degree days along the coast.

“August, quite delightful in that regard,” Robinson said.

As Arnone said, the season progressed positively as the calendar moved on, Arnone said.

“I would say we finished strong,” Arnone said. “The weather was much better, sunny and very seasonable.”

Although Labor Day is behind us, the Jersey Shore has a secret: September is arguably the most beautiful month along the coast.