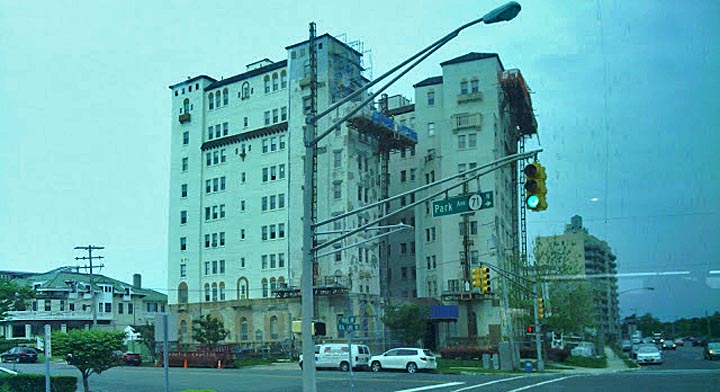 UPDATE: A funeral will be held for Jay Andrew Bernestein Wednesday, Nov. 27 in Philadelphia, PA, his sister Judi Bernstein Goldstein has informed his Facebook followers. Additionally, a memorial service is being planned for next week in Asbury Park. The Coaster will post details as soon as they become available.

Asbury Park realtor Jay Bernstein of The Conover Agency fell to his death this morning, Sunday, Nov. 24, 2013 from The Santander building, at Deal Lake Drive and Park Avenue in the city, where he owned a penthouse apartment on the ninth floor.

Asbury Park Police are investigating the incident. The Santander building, seen in a file photo above, has been undergoing restoration for much of this past year.

The Coaster will bring readers more information as it becomes available.

The Conover Agency website biography of Bernstein reads as follows:

Born in Philadelphia and raised in Wilmington, [Jay] became a proud resident of Asbury Park in 1999 and is ecstatic with the achievements and endless opportunities that this “City by the Sea” offers its residents and visitors with respect to diversity and determination.

Jay studied at University of Delaware and is a member of The New Jersey Board of Realtors, receiving its highest honor, The Platinum Circle of Excellence Award in 2004 and 2005. He is a Board member of The African Film Festival, working in conjunction with Lincoln Center and other participating non-profit organizations, volunteering his time to “Camping is Happiness” as a summer counselor, Human Rights Campaign and amfAR, fulfilling his belief “that we can make a difference”.

Jay is an avid sailor, cook, and traveler.