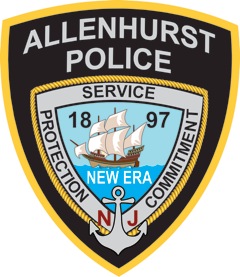 For the first time in its more than 100-year history, the Allenhurst police department will have its own personalized police patch.

The image on the new patch (pictured on this page) is that of the famous 1854 New Era shipwreck that occurred off the beach in what is now Asbury Park. The local volunteer lifesaving service station was manned by many residents, in what would later become Allenhurst, and they were among the first respond to the tragedy.

“We wanted a patch with a personal and some historical connection to Allenhurst,” police Capt. Michael Schneider said.

He said it was decided that the New Era would be an appropriate and historic image for the department, which was established in 1897.

“We’ve been looking for a new patch design for some time. We switched to our current patch in the late 1990s and before that we had a very antiquated patch.

This is the first time the police department has had its own personalized patch.

It’s not something we are getting from stock,” he said.

Schneider said the patches are already being placed on officer’s uniforms and will also be placed on police cars and other department equipment requiring a logo.

The New Era was a three-mast German packet ship that ran aground on the evening of Nov. 13, 1854. Of the 415 passengers aboard, only 132 survived a cholera epidemic and the shipwreck.

The condition of the dead passengers found on the ship the next day was so horrific when rescuers arrived on the scene the next morning that the U.S. Congress enacted legislation that paid some of the volunteer life-saving station members for their service. They then became federal employees and this agency was later incorporated to become the U.S. Coast Guard.

“I think this is great and impressive that the chief and commissioners want to pursue a prominent display of such an important event,” said Allenhurst historian Dr. Richard Fernicola.

Allenhurst is named after the family Abner Allen who was one of the first keepers of the local hut-like lifesaving station, which was actually just north of Deal Lake in what is today Loch Arbour.

“Abner was one of the first to respond to the New Era wreck. He was there within five minutes of its stranding. This is an important piece of Allenhurst history. This is one of those infamous shipwrecks in American history and, locally, and Abner Allen played such an important role,” Fernicola said.

Fernicola was part of a small team that retrieved the New Era anchor off of Convention Hall in Asbury Park in 1999. The anchor is now displayed in front of St. Andrews By The Sea Church in Allenhurst.

In another odd bit of American maritime history, the famous burning Morro Castle cruise-line ship became grounded off Asbury Park in 1934- exactly on top of the New Era, which went down exactly 80 years earlier.