by The Coaster Editorial Staff
in Asbury Park, Ocean Grove

If the water in Wesley Lake looks very low at the western end, it is all for a good reason – the lake will be dredged soon.

“Everything is taken care of (for the project),” said Neptune Township Committeeman Michael Brantley, who also chairs the Wesley Lake Commission.

About 400 linear feet of retaining wall along the southerly side of Wesley Lake will be replaced and an estimated 45,000 cubic yards of silt will be removed.

Brantley said the contractor can begin the project at any time but that weather issues may have caused a delay.

“But he can get started anytime but we want this done by Memorial Day weekend,” he said.

The $1.4 million project is being largely funded through grant money.

The money will fund the dredging of both lakes, inspecting shoreline stability, and repairing a portion of a concrete retaining wall that was severely damaged and partially collapsed during Superstorm Sandy at the eastern end of the lake in Ocean Grove.

Bidding on the wall project caused awarding the contract to be delayed due to higher-than-expected costs.

The state Department of Environmental Protection and the State Historic Preservation Office have oversight on the projects because Ocean Grove is an historic district. 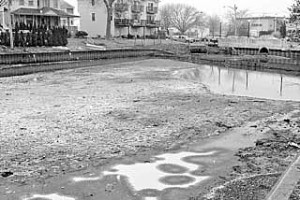 Neptune will pay 10 percent of the cost, or about $146,200 with money coming from the Monmouth County Open Space Grant Program and the township’s capital improvement fund. Neither Asbury Park nor Bradley Beach has committed any money toward the two dredging projects.

At left – The water in Wesley Lake between Asbury Park and Ocean Grove is at an all-time low. The lake is scheduled to be dredged soon. At top – The retaining wall at left near the east end of the lake is also scheduled to be repaired. COASTER photos.