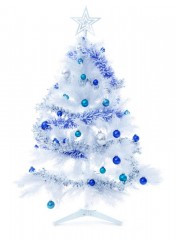 The hustle and the bustle of the holiday season is officially upon us as shoppers scurry to find the best deals and plans for the neighborhood Christmas party are finalized. With all of the festivities surrounding the season it is often easy to forget that the holiday is not always a joyous one for all. It can be a time of rememberence for the loss of loved ones or the loss or a job or a home.

For the third year, the Hamilton United Methodist Church in Neptune is offering a Blue Christmas service as a means of reaching out to comunity members who may be having a difficult time with the Christmas season. Set for Wed., Dec. 17 at 7:30 p.m, the service will include the lighting of candles, music and discussion about the hardships of the season for some.

“So many people have suffered losses in the past year in many ways. There are those who are not ready for a Merry Christmas or the joy of the season. In a time of grief and loss, the Blue Christmas service may help those in coping with the Christmas season,” Pastor Shelley Potter-Abrahamsen said.

She added that the Hamilton United Methodist Church, which has more than 200 members, welcomes anyone of any faith to attend their special service which is meant to hopefully help in the healing process.

Potter-Abrahamsen, who has been pastor at the Neptune church for more than three years, said she began the Blue Christmas service in December 2012 because of her own familiarity with grief and loss issues. In 2001 she worked in Philadelphia with families who had to identify family members who were victims of homicide.

“I have been in the grief counseling field for a number of years. I worked with GAP (Grief Assistance Program) at the Philadelphia Medical examiner’s office. We worked with families in the trauma unit. I was also a student chaplain at Cooper Hospital in Camden, N.J. Origianlly I am an LPN,” she added.

Potter-Abrahamsen added that loss in people’s lives can be found in many different ways.

“There’s loss of a loved one, the loss of jobs or homes, the loss of a child leaving home for college,” she said. “Big changes for people are felt as a loss. The Blue Christmas service is a time for reflection.”

Potter-Abrahamsen said that the service helps as a “comfort for others to learn that there are other’s feeling the same way.”

“It is a place where you can feel safe…if you want to talk about what you have lost or who you have lost. We want it to be a service of hope and healing,” she said.

The “Blue Christmas” service will take place on Wednesday, December 17 at 7:30pm at the Hamilton United Methodist Church, 858 Old Corlies Avenue, Neptune. For further information contact the church office at 732-922-2069.