Asbury Park’s new City Council, led by Mayor John Moor, came in as a unified team sworn in on New Year’s Day as the jubilant overflow crowd answered with a standing ovation.

The Jan. 1 swearing-in ceremony for the Asbury Together ticket, which swept the November election, was in sharp contrast to the last swearing in which took place in July 2013 and featured 11th hour deals prompting some residents to storm out of the meeting.

Under the city’s new form of government, which took affect Jan. 1, three of the four new council members must seek election again in two years which, in effect, creates the staggered terms, as now required. The three winners in the upcoming election will then be seated to four-year terms. Moor, as mayor, is automatically seated to a full, four-year term.

Following the draw for terms, Kendle will serve a four-year term and Quinn, Woerner and Clayton will each serve for two years.

Quinn said she is fine with drawing the two-year term.

“I feel good about it and I think I can do a lot in two years,” she said.

Quinn said she thought the large crowd at the ceremony is a good sign for the city.

“I thought it went great and it had a wonderful vibe. I think people are really excited about the future but I do ask that they be patient,” she said.

The new council with features three newcomers: Kendle, Woerner and Clayton will be faced with selecting a new city manager as well as a leader of the police department whether it be a police chief or a police director. The council did not renew former City Manager Jack Kelly’s contract. Longtime city employee Anthony Nuccio has been named acting city manager until a replacement is found.

The change of government also moved the municipal election from May to the November general election and gives the residents the power of initiative and referendum.

In a related matter, two candidates on the unsuccessful A-Team slate in the November election have filed a lawsuit seeking 343 vote-by-mail ballots disqualified by the Monmouth County Board of Elections to be ruled as valid.

If the suit results in the ballots being qualified, then there may be enough to bring about a run-off election between the two top vote-getters for mayor, namely current Mayor Moor and the A-Team mayoral candidate Remond Palmer.

If the ballots are ruled as qualified, then there is also the potential for A-Team school board candidate Arva Council to be seated on the Board of Education.

Below – Coaster Photo – Amy Quinn is sworn in as deputy mayor of Asbury Park on New Year’s Day. Her wife, Heather Jensen, held the Bible for her. 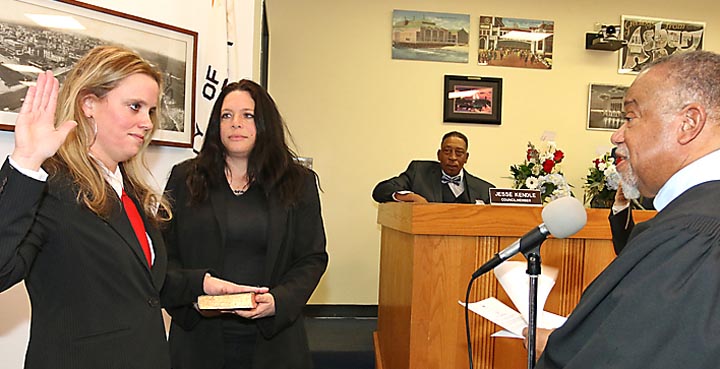