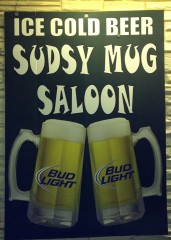 It was lights, camera, action at the Sudsy Mug Saloon on Sixth Avenue in Neptune last Sunday morning.

Ocean Grove resident Drew Shiminec, 27, used the bar as one of the settings for his upcoming short movie, “Raising the Dead.” Shiminec wrote the screenplay.

“It’s a dark comedy about a kid who comes back home after years volunteering in Uruguay,” he said. “However, both his mother and brother have told the insurance company that he is dead to collect money for a start-up business. The son doesn’t want to turn them in, even though he thinks it’s stupid, so he and an old high school nemesis meet at the bar and decide to hit the road together.

“Most of it takes place in New Jersey and that is where it ends when they start to hit the road. The longer feature will be more of a road-trip light comedy.”

Shiminec, a graduate of Monmouth University, owns Drew Jersey Productions and has been making videos for various companies and clients as well as working for World Wrestling Entertainment.

This will be his first short film which will run 30 minutes. His goal is to expand it to feature length.

Local comedians Taylor Allen and Biff Swenson star in the movie, which will be uploaded online once it is completed. He hopes to attract donors and contributors to fund expanding the film further.

Shiminec said he will consider entering the film in festivals at some point.

“The ultimate goal is a feature length film and that’s how script is written but I would need extra money. The short is created to intrigue others into funding it,” he said.

Sudsy Mug owner Lynn Kieran said she thinks it is “pretty cool” that a movie is being filmed in her business.

“They asked me if they could film here a long time ago and I think it will give the place some notoriety and I could go out on a successful note,” he said.

Kieran, who has owned the Sudsy Mug for 32 years, has the business up for sale.