Livin’ in Ocean and Lovin’ Their Cops 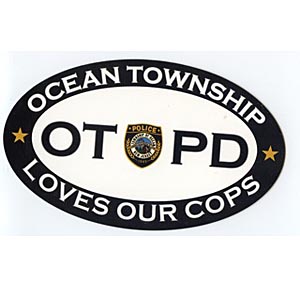 If you live in Ocean Township and support your police department, really support the department, you now have a way to display that support for everyone to see.

A magnetic sticker which reads “Ocean Township Loves Our Cops” is available to any resident who would like to display it on their vehicle.

The idea came from longtime township resident, John Huss, who has lived in Ocean for 52 years.

“The Ocean Township police is a class organization,” Huss said. “They are very effective and people should know it and they should advertise it.”

Peters recalled when Huss first discussed the idea in March.

“He called me up and said he wanted to do something to show support for the police in light of events throughout the country,” Peters recalled. “He brought me a prototype he drew up of a sticker that he thought would be nice to give out. I looked at it and I said, ‘ Number one the idea is outstanding.’ I loved it.”

But then there was a but.

“I didn’t like the prototype,” he said. “So, I said, let’s design something we can all agree on; something more graphical, a little sharper. And he (Huss) said ‘Absolutely.’ “The proposal took off.

Peters called in one of his detectives, Jeff Malone.

“I am lucky we have have him,” Peters said. “In his former career he was a graphics artist. I told him what we wanted to do and in less than a month he came up with three prototypes.”

Huss was called back to the station; he really likes one of the designs and so did everyone else. He ordered 250 and paid for them out of his own pocket. Last week he presented the first one to Mayor Chris Siciliano and the second one to Peters.

Huss said his whole idea stemmed from the fact he was tired of police bashing throughout the country and he wanted a way to show respect for cops.

“I have loved all our cops in the past and will love them all in the future,” he said.

Residents are invited to pick up a free magnetic sticker either at town hall or at the Ocean Township Historical Museum, adjacent to the library.

Don’t be surprised to see the design popping up in other places.

“We are going to put that design on water bottles, tee shirts, mini-backpacks,” he said. “We really appreciate what he did.”