Love on the Beach in Asbury Park

There was a lot of Love in Asbury Park Tues., July 28 when Rock and Roll Hall of Famer Darlene Love shot a video in the city for her upcoming album.

Shooting of the video for her new song “Forbidden Nights,” an Elvis Costello composition, took place on the Third Avenue beach about 6 p.m. and from a 1961 Cadillac convertible at other locations in the city earlier in the day.

Joan Jett, Paul Shaffer and Maureen Van Zandt were also on hand to participate in the shoot.

Love will play the Paramount Theatre on Sept. 12 accompanied by Van Zandt and the musicians who performed on the album.

The video was shot by the Collaboration Factory, based in Los Angeles, and the public was invited to participate by coming to the beach and being in the video. 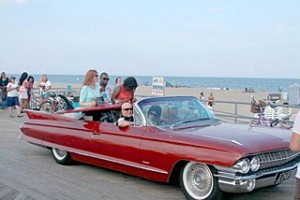 Sammy Boyd, head of Sammy Boyd Productions which has hosted Darlene Love concerts in the city in the past, said it was a long day but that everything went very well.

“It went better than anything I could have imagined. It was an amazing production of a song that has strings and horns and Paul Shaffer was great as a conductor,” he said.

Boyd, who is also a sponsor of the Sept. 12 show, said that the song was performed about 10 different times at the beachfront and the day’s production went from 5:30 a.m. until 9:30 p.m.

“It was an amazing journey,” he said.

In the video, Boyd said that Love picks up two hitchhikers in her Cadillac, namely Joan Jett and Paul Shaffer, with some filming taking place along Lake Avenue in Asbury Park and at Joe Palaia Park in Ocean Township.

Vince Troniec, a professional surfer who lives in Allenhurst, provided surfing props and memorabilia to be used in the video.

“I think filming the video here is great. After Superstorm Sandy, a lot of people didn’t know much about what was going on with the area beaches and this lets them know the beaches are great with lots of access,” he said.

Troniec is well-known as a source for surfing memorabilia and he was recently inducted into the New Jersey Surfing Hall of Fame.

Hope Wade, who is Love’s stylist and fashion designer, came down to Asbury Park for the first time from her home in Pomona, NY to help support her friend and client.

“I just want to be part of the scene and make sure there are no wardrobe malfunctions,” she said.

Wade said it was her first visit to Asbury Park.

“It’s beautiful. The beaches are very beautiful and it’s only an hour-and-a-half from my home, so I will definitely be back,” she said.

As for the afternoon sun and heat at the beachfront, Wade said she is OK with that.

“I am Jamaican so I can handle the heat,” she said.

Love, 74, is an American popular music singer and actress who first gained prominence in the 1960s for the song “He’s a Rebel,” a No. 1 American single in 1962. She was also one of Phil Spector’s artists who produced a celebrated Christmas album in 1963. She is included among Rolling Stone’s 100 Greatest Singers and was inducted into the Rock and Roll Hall of Fame in 2011.