The B Plot: Trail of Terror at Camp Evans 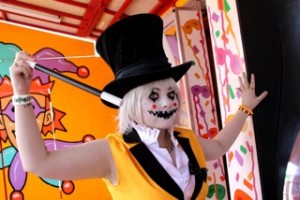 Creepy clowns, awkward aliens and ghoulish ghosts have returned with a few of their possessed friends for Season 10 of Camp Evans’ Base of Terror haunted walk in Wall Township.

“Our volunteers have done a fantastic job of making the trail extra frightening and special for its tenth anniversary,” said Fred Carl, chief operating officer of the Info Age Science History Center and Ocean Grove resident. “This is way beyond a Halloween attraction. People say it’s more along the lines of walk-through art installation or performance art because of the spectacular creativity and energy that goes into it.”

Twenty lead volunteers – professional and amateur set designers, artists, lighting experts and builders – began planning this year’s Base of Terror in January. After deciding on themes, the talented volunteers broke-out into groups to develop and fully execute each of the 12 sections of the 45-minute long walk.

This year’s trail begins with a walk through the first floor of the 75 year-old brick Marconi Hotel building where visitors are greeted by the undead. Moving through the trail, in and out of the National Historic landmark buildings, the unexpected becomes expected.

The Base of Terror is open every Friday and Saturday evenings in October.

“You have been through the insane asylum and life-size demonic dollhouse and the body parts chef has completely chilled your senses, but there is still more,” Carl said. “Just when you think the trail should be done, more undead slither out of the dark. You are hardly half-way through as you run for safety from the chainsaw-wielding clowns into the worm hole, entering an alternate haunted universe of aliens that will do anything for new friends.”

Is that a person or a mannequin? What’s behind that corner? Should we turn right or left into the dark? Who, or what, made that sound? Is it OK to pass the strobe lights into Tillie’s madhouse? The sensory-overload and attention to detail is what makes this trail the best Halloween attraction in New Jersey, luring more than 7,000 visitors in eight days it was open last year. On a sunny day, the 100 year-old former 55 acre military base is scary. Add incredible theatrical lighting and a few undead clowns and it’s the perfect setting for Halloween fun.

“The Trail of Terror is super-awesome,” said Jeffrey Brace of Ocean Township. “I come back every year because they keep it fresh and fun.”

Eighty actors and actresses from area high schools including Ocean Township, Nepune and Wall, are trained in the ultimate creepy etiquette. Don’t touch the guests, scream from your chest, know your audience and basic safety is all part of the training. Before the Jack-o-lanterns are lit and the old wood doors creek open, the student and professional actor volunteers spend hours applying make-up and getting their detailed costumes exactly wrong… errr, right.

“Our goal is to create a fun, exciting and safe experience,” Carl said. “The volunteers share their creativity and passion to help us maintain this landmark at the Jersey Shore and educate future generations. We are very very thankful to everyone – too many to mention – who share their time and talents to make the Base of Terror happen”

“In his movie ‘Easy Rider’ he mentions the army bouncing radar off the moon, which happened here during World War II,” said Carl. “He went on to say that shooting stars were UFOs. We were inspired by the idea that the military base would have been the alien’s first landing place. Our inaugural Halloween fundraiser took place in the hotel building with an ‘aliens return’ theme.”

As Info Age grew from managing seven structures to the 16 today, the event evolved into the center’s largest annual fundraiser. Proceeds benefit the maintenance of the buildings and grounds and hands-on education. Over the past 10 years, Info Age has re-roofed six of the site’s largest buildings and repaired – with the help of Princeton University – the 60-foot wide historic satellite dish and TIROS ground control station. Coastal Habitat for Humanity also renovated one of the site’s structures in 2013.

“Part of the funds we raise this year will be used to start new science, space and meteorology educational programs,” said Carl. “We are beginning our new season this weekend but already dreaming of the illusions for next year.”

Camp Evans’ Base of Terror is open Friday and Saturday evenings from 7 to 11 pm until Halloween (weather permitting). 2201 Marconi Road, Wall. General admission is $17. CampEvansBaseOfTerror.com has more.