‘We Are With You Orlando’ 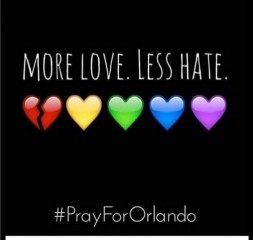 “Asbury Park is with you Orlando,” Asbury Park Deputy Mayor Amy Quinn said outside Georgie’s Bar. “Our hearts break for the victims, their family and friends. People came to that club as a safe-haven with a promise to see friends, celebrate life and acceptance. This is a somber time for our community; we carry the pain of Orlando with us.”

And so it went Sunday night as area residents gathered to mourn and remember the Orlando mass shooting victims, their families, friends and the community.

“It was a flash vigil we organized in hours because we knew we had to do something,” said Connie Breech, an Asbury Park resident, police officer and GLBT rights lobbyist. “This was another horrifying act of evil and terror by one individual on all our people. We came here to show our support and stand strong for Orlando and our country.”

More than an estimated 300 people from the greater Asbury Park area gathered at the Tides Hotel, Paradise Club and Georgie’s Bar for a moment of silence at 9 pm. Afterwards, community leaders including Breech, David Hoffman and Garrett Giberson, among others spoke about hope and solidarity and comforted one another.

Similar to Asbury Park, Orlando is said to be a tight-knit and diverse GLBT-friendly community.

Outside Georgie’s Bar, the crowd stood together with tear-lined, candle-lit faces in a compelling group prayer for the wounded and victim’s families led by Hoffman.

“We are each other’s keeper,” said Garrett Giberson, city resident and coordinator for the Office of Emergency Management, to the crowd. “We are here to comfort one another in times of need and we must remain vigilant and aware to ensure our safety going forward.”

In the first 36 hours after the largest mass shooting in US history and hate crime during Pride Month of June, area residents also took to social media to communicate their support of Orlando and sentiments about gun control.

One trending Facebook post of a rainbow flag flowing in the wind read “we are with you #LGBTOrlando” and was liked more than 500 times as of presstime. A second locally trending post read, “I love every single member of the LGBT community, of the Latino and Hispanic world and of the human family today.”

Many locals have revised their profile photo to a just-released Facebook image overlay that reads “we are Orlando” accented by a digitized rainbow flag.

In an additional show of support by the city of Asbury Park, the rainbow flag – the universal symbol of the GLBT rights movement – will hang at half-mast in front of city hall until Saturday.

“(Hanging the flag) is another way for us to show we are united with the City of Orlando,” said Quinn. “This mass shooting is devastating not only to the gay community but to the entire community. We are a people here of one coming together from every background with Orlando and sending them our strength. Love is the answer.”

A peaceful walk in support of the victims of the Orlando mass shooting and GLBT equality everywhere has been planned for June 18 in downtown Asbury Park. All are invited to participate, express their emotions and collectively share in the positive energy of strangers and friends.

The walk will start at Kennedy Park on Cookman Avenue and is planned to proceed east towards the boardwalk and back. Registration starts at 10 am and the walk will begin at 11 am after a moment of silence. Those interested are encouraged to simply show up on Saturday or visit GardenStateEquality.org/walk.