by The Coaster Editorial Staff
in Neptune, School News
4
VIEWS
Share on FacebookShare via EmailShare on Twitter 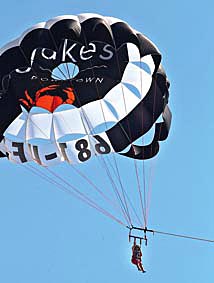 It’s not every day that elementary school students get to see their principal flying over their heads on a parasail. But that is exactly what hundreds of Neptune Midtown Community Elementary School students saw on Mon., June 20.
School principal Arlene Rogo promised her school’s 450 students that if they could read 25,000 books by the end of the school year, she would go parasailing for them. And, the kids won the bet by reading 26,308 books!
So, it was a high-flying school principal off the beach at the Ocean Grove fishing pier Monday morning as hundreds of students either took buses or walked to the beach to see Rogo’s feat.
Rogo, 58, said her first-time parasailing trip was “really exciting.”
“It was a little scary going up but once I was up it was very tranquil. It was nice to see all the kids, waving and holding signs. It made it all worthwhile,” she said.
The idea for parasailing came up during a teacher’s conference and Rogo said she would so it.
“Literacy and promoting reading is very important. It was really wonderful and I am really proud of the kids more than anything else,” she said.
Children from the school’s pre-kindergarten through the fourth grade watched as she soared practically over their heads.
“She’s crazy. To go up into the sky by herself?” fourth-grade student Cristopher Keyes said while standing on the fishing pier.
But then again upon some reflection, Christopher said he actually might consider doing the same thing one day.
“Because I like roller coasters,” he said.
Christopher said he read more than 50 books during the school year, with an emphasis on fun books.
“The books I like to read are silly and funny and I can relate to them,” he said.

A log was kept documenting the books every student read and the parasailing fit in perfectly well with the goal of the reading contest. A picture of a parasail with a moving bar graph was installed in the school to show students how many books they had thus-far read.
“It kept adding up every month and I am very impressed and excited. We are showing kids that reading can make you soar,” school librarian Meghan Plevier said.
“It was an inspired program that really promoted reading in the school and the kids are looking forward to this as a climax to the end of their school year,” she said.
Plevier said that, on average, each student read about 58 books during the school year.
“Some read books more than others and it depends on the grade level,” she said.
Fourth-grader Julianna Brower, 9, said she read about 20 books, with an emphasis on the “My Weird School Days” series.
As far as her principal parasailing overhead.
“It’s pretty cool and it’s a fun way to spend at the end of the year,” she said.
Monday was not only the last day of school but also the first day of summer and weather was perfect for parasailing. A previous attempt to hold the event last week was cancelled due to high winds.