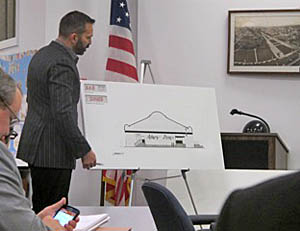 Finishing touches to the landmark Asbury Lanes building on Fourth Avenue in Asbury Park were unanimously approved at this week’s Planning Board meeting.
Attorney Lisa A. John-Basta, of Chiesa Shahinian & Giantomasi PC, said her clients were not asking for deviations from prior plan approvals but were seeking approval only for modifications to the current plan.
Civil Engineer Robert Curley testified about changes to the front of the building. The main change is the moving of the ADA Accessible ramp from the main entrance to the east side of the building.
The change will make the ramp closer to the only ADA parking space in the parking lot providing easier access to the ramp to the main entrance on Fourth Avenue.
The change will cause the elimination of five parking spaces in the parking lot down from 19.
Mayor John Moor, who sits on the board, said there is already a parking problem in the city and asked that the two proposed bicycle racks, which could accommodate up to four bikes each be changed to larger racks that could collectively hold up to 16 bikes.
Board Member Garrett Giberson, who has lived in town all his life, noted that more and more people are relying on bikes to get around the city.
Lighting was also discussed at length with Architect Dominic Kozerski testifying that the LED lights affixed to the building would not create spillage onto the public right of way, except for possibly near the parking lot.
Kozerksi said the lighting was necessary for drivers to navigate the entrance to the lot.
Another modification involves installing shoebox lighting fixtures, similar to those at The Asbury. He also said the nighttime lighting is designed to face downward and present a “gentle glow of illumination” around the building, including the side where the current mural is painted.
Kozerksi said plans call for the extension of the mural to the end of the building to be done by the original artist, Porkchop.
“We would be really happy to have him finish the building,” Kozerski said.
Landscape architect Thomas Bauer testified that there would be a variety of ornamental grasses and rose bushes planted around the building similar to what he installed at the Asbury Hotel.
An area for loading and equipment delivery is included in plans for the parking lot and Curley said because it is an owner/operated lot, owners will do at their convenience and not interfere with traffic at the site.
The rear of the building abuts the Asbury Hotel, which is on Fifth Avenue, and the modifications allow for both buildings to be connected allowing patrons to cross over.