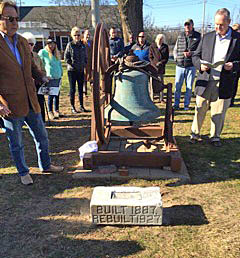 Avon residents gathered on New Years Day to watch the unsealing of a time capsule found at the former Taylor Memorial Baptist Church.
A lead box inside the building’s cornerstone contained items preserved from the time of the church’s original construction in 1887 and rebuilding after a fire 40 years later.
The borough bought the church after it closed and tore it down when efforts to sell it failed. The lot where the Sylvania Avenue church once stood and an adjacent property containing the former parson’s home were sold at auction to a single buyer last month for $1.5 million.
Borough Administrator Timothy M. Gallagher said a history book reported that there was a time capsule preserved at the site.
“When we demolished the church, we looked and looked but couldn’t find a time capsule,” Gallagher said at the mid-day ceremony in front of the municipal building.
In the process of cleaning up the marble cornerstone, borough workers discovered a cutaway which turned out to be the storage area for the time capsule. At Gallagher’s suggestion, the Board of Commissioners agreed to hold a public event Jan. 1 to reveal the contents.
After Gallagher and Mayor John B. Magrini read excerpts from the history of the church, the lead box was extracted from the cornerstone and moved inside to the gymnasium to be pried open.
At the advice of document preservation experts, acid-free paper was laid down on tables and Magrini put on white cotton gloves to remove the contents of the box.
Coins from as early as 1880 were found on top of the box. The first objects removed by the mayor were pages from local newspapers.
A full-page article headlined “Tin Box Bares Graphic History of Avon” and published in January of 1928 detailed the first opening of the box. When the new building was dedicated, additional items were added, most of them clippings from publications such as the New Jersey Tribune, published in Asbury Park, and The Baptist Weekly of New York.
Many of the documents in the time capsule referred to Avon by its former names, New Branch and Key East. When the church was initially built, what is now known as Avon was part of Neptune City.
A sheet of song lyrics, photographs, church bulletins and membership lists were also extracted from the box. A certificate from the Neptune Stone Co., with its yard located at Main Street and Second Avenue in Asbury Park, documented the presentation of the cornerstone to the church in 1886.
Handbills from the Asbury Park businesses of plumber Uriah White (“well-driver, gas and steam-fitter”) and Colver & Hope, suppliers of “builders’ hardware, farming utensils and tools,” may indicate their involvement in the building of the church.
“It will be interesting in the days and weeks to come when we actually read this stuff and see what it says,” Gallagher said.

Learn About the History of Avon Pool