Vegan Food Stand Offers Food for All in Asbury Park 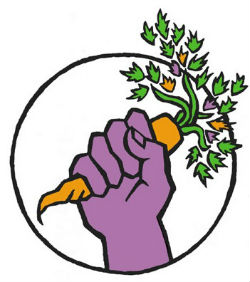 
The local chapter of the Food Not Bombs organization has spent every Sunday afternoon for the past three years giving out vegan food to anyone who wants at the Asbury Park Transportation Center.

One of the regular volunteers, Stacey Tavis of Belmar, says she goes to the transportation center about twice a month to help out. She became involved with the group through her friend Marissa Pardue of Wall Township who founded the chapter.

Tavis said Pardue had worked at other chapters across the country before deciding that this area needed its own chapter.

“She saw a need in this area and posted on Facebook and other sites looking for volunteers,” Tavis said.

The weekly sessions are called “shares” and Tavis said other than holding shares for the now defunct Tent City in Lakewood, the group has been a staple in Asbury Park.

The national Food Not Bombs organization started as a vegan group and the local chapter has adhered to that idea.

“The national organization started that way and we do it to keep up with them,” she said.

Tavis said the food they share is donated from area groceries including Nature’s Corner and Dean’s Market which provide regular donations.

It’s excess stuff they can’t use so they donate it rather than throw it away. It eliminates waste,” she said.

The group has regulars who stop by every Sunday and others who walk by and stop for food.

They now have books and clothing being donated, which they also distribute.

For the winter they are only set up for an hour, but that changes as the weather warms.

“And we’re always looking for volunteers,” she said.