Submarines and the Jersey Shore? Author will discuss and sign new book 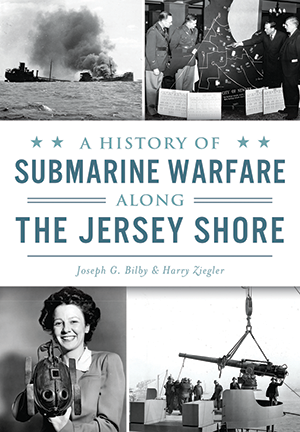 The Jersey Shore is known for many things, but a hotbed of submarine activity during World Wars I and II?

In their book, “A History of Submarine Warfare Along the Jersey Shore,” co-authors Joe Bilby and Harry Ziegler document this surprising piece of maritime history.

On May 16 at 7:15 p.m. co-author Joe Bilby will share their findings at the Township of Ocean Historical Museum event at the Board of Education office, 163 Monmouth Rd., Oakhurst.

Those findings trace the state’s connections to submarine warfare back to 1776, the year the first (and not very successful) American submarine sank in the Hudson River off Fort Lee.

The connections continue with the story of Paterson resident John Holland (1841-1914), the self-taught engineer credited with inventing the first truly viable submarine. He ran his experiments in the Passaic River.

Most fascinating perhaps are the stories of German U-boats planting mines and sinking ships off the Jersey coast during the World Wars. On “Black Sunday,” June 2 , 1918, the German sub U-151 stopped, evacuated, and sank six commercial ships along our shore. Twenty-four years later, in the early months of our involvement in World War II, German subs were back, destroying merchant ships traveling along our coast.

Bilby, a Newark native, is a Vietnam veteran and current historian for the National Guard Militia Museum of New Jersey. He has written over 400 articles and nineteen books on New Jersey and military history. Over the years, he has shared his expertise and personal collection of photographs and memorabilia with our Museum.

A book signing follows the talk. And a very brief general meeting—just long enough for the election of Museum officers—opens the evening.

The speaker event is open to the public, free of charge. Donations are appreciated. Refreshments are served. (The group collects and welcomes nonperishable items for the FoodBank of Monmouth and Ocean Counties.)