The Stars Were Out for City Music Festival

As the Upstage Jam began at the Paramount Theatre in Asbury Park Fri., April 21 Dorothy Hinchcliff Goodrich of Ocean Township turned to her friend and said,“Who’s that next to Little Steven?”

Her friend said it was Marc Ribler.

“No, on other other side,” Hinchcliff Goodrich said. “It’s Bruce Springsteen.”

And so it was.

Springsteen, who performed at the legendary Upstage Club on Cookman Avenue in Asbury Park many times, joined his former colleagues for a super star jam following the screening of “Just Before the Dawn: Riot. Redemption. Rock ‘n’ Roll.” by filmmaker Tom Jones.

The screening and jam were part of this year’s Asbury Park Music and Film Festival, which ran April 20 through April 23 at various venues in the city. It included a conversation with E Street Band member Max Weinberg and performances by Mike and the Mechanics and the Preservation Jazz Hall Band as well as a host of local musicians.

Interlaken resident Hunt Parry, who was there with his brother, Lynn, said Van Zandt said it best when he compared the Upstage Club to college.

“For them it was their college and this was like a college reunion,” Parry said. “It must have been very emotional for them with all the memories going back to when they were 19 years old. It was very cool…very moving.”

Hinchcliff Goodrich said it was an exciting night. 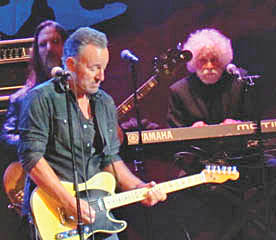 “As a longtime resident of the area, it was exciting to see so much enthusiasm for the movie, the festival and Asbury Park overall,” she said.”It’s almost unbelievable seeing so many people in Asbury Park again, and so encouraging to see that the efforts of so many people who continued to support Asbury through its darkest hours are getting to share in its rebirth.”

The Lakehouse Jr. Pros, of the Lakehouse Academy on Lake Avenue in Asbury Park, were featured in the film and performed during the jam. They played “The Hours Before Dawn” by Joe Petillo.
Songs featured at the jam included a rocking “Johnn B. Goode,” “Got My Mojo Workin,’ “ “Lucille,” “I Don’t Want to Go Home” and “The Fever.”

Springsteen also was at Little Steven and the Disciples of Soul show Saturday night at the Paramount Theatre where he watched from his seat in the audience and then joined his friend on stage for two encore songs.

Patsy Vornhagen of Interlaken was there for the Saturday show.

“As soon as I heard Bruce was at the Paramount on Friday, I bought tickets for Saturday’s show for my daughter, Casey and me,” she said. “What a fabulous night!”

The festival raised money for youth music programs in the city including Hope Academy Charter School, the Hip Hop Institute and the Summer Recreation Music Camp.