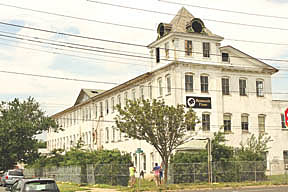 A landmark Neptune building – once home to one of the most unique manufacturing companies in the United States- is being demolished this week.

The S.S. Adams Co. building, pictured, built in 1932 at the intersection of Memorial Drive (then Railroad Avenue) and Seventh Avenue, saw the wrecking ball this week after it was determined that water had too severely damaged the building for it to be saved.

A 2013 site plan approved by the Board of Adjustment allowed the developer, now Neptune Developers LLC, to convert the 68,840-sqaure-foot, four-story building into condominiums or apartments.  The site plan called for the building’s exterior, including its unique clock tower, to remain with most of the major renovations being done inside the building.

It was later discovered, however, that water damage in the building was so severe that it could not be saved and needed to be razed. In 2015 the zoning board and the developer used the same original site plan approval to allow a new building while still preserving the exterior architectural features of the old building.

“The exterior of the new building will match the one on the old building, including the clock tower. It will look similar to what was always there,” Zoning Board Secretary Kristie Armour said.

One modification approved by the board is to allow a parking area on the ground floor of the building.

“This also provides for more landscaping and green space on the site,” Armour said.

Born in Denmark in 1879, Soren Adam Sorensen moved to Perth Amboy, which had a large Scandinavian community, when he was two years old. Adams found himself eventually employed as a salesman for a dye company. One of the products he sold caused workers to sneeze and Sorenson found a way to extract this derivative from the dye and called this new powder “Cachoo” and launched the Cachoo Sneezing Powder Company in Plainfield.

He eventually changed the name of the company to S.S. Adams Co. and began inventing and manufacturing novelty items, including gag gifts such as the Exploding Cigarette Box, the Snake in a Can, Itching Powder, the Stink Bomb, the Dribble Glass, and the popular Joy Buzzer. He turned down manufacturing the Whoopee Cushion because he thought it was too vulgar and would not sell- a decision he later regretted.

Sorenson’s company was doing well enough that it bought a stately new factory building in Neptune in 1932 during the Great Depression. He eventually became the only manufacturer of gag novelty items in the United States. Sorenson claimed to have devised over 600 different items and patented about 40 of them. He continued to lead S.S. Adams Company until his death in Asbury Park in 1963 at age 84.