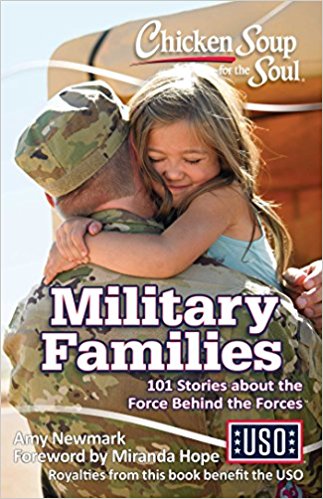 How does war hit home, even if it’s thousands of miles away? Ocean Township resident Lois Kiely, who has recently published an essay in “Chicken Soup for the Soul for Military Families,” will present a program Aug. 22 that addresses this question.

Kiely writes about her father who went missing in Italy during WWII. His neighborhood buddies formed an association to honor him and send her to college.

As a “war orphan” Kiely shares the obstacles that families face who have lost loved ones in war. She also pays tribute to programs and organizations that provide recognition and support for military families.

The latest edition of the popular Chicken Soup series is dedicated to military families and provides insights from the perspective of those who have kept the home fires burning. The book will have its local debut at the old Oakhurst School auditorium at 163 Monmouth Rd. Aug. 22 at 7:15 p.m. It features accounts of those who worried and prayed for the safe return of their soldiers from Vietnam, Afghanistan, and all major conflicts.

This anthology sparks the question, “Who looks after those who wait behind?”

In researching the topic, Kiely found a support organization called the American World War II Orphans Network (AWON) that brings the children of this conflict together. She also became aware of a nationwide program that pays tribute to our service men and woman. Blue Star Highways and Byways places memorial plaques in places where they can be viewed the road. Two such markers are located in nearby towns.

“The Chicken Soup for Military Families” will be sold at this presentation as a fundraiser for a special price of $10. All proceeds will go to the Township of Ocean Historical Museum.

Kiely, a Wanamassa resident, serves on the Museum’s Board of Directors; she is a graduate of Monmouth University, a former New Jersey Teacher of the Year, and a retired teacher and school administrator. Her stories have been published in the Phoenix Writers’ Club magazine.

This meeting is free and open to the public, refreshments will be served. (Bring your non-perishable donations for the FoodBank of Monmouth and Ocean Counties.)