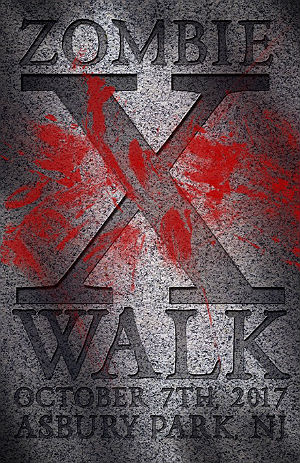 The 10 annual Zombie Walk, which features thousands of the undead, will take place in Asbury Park on Sat., Oct. 7 beginning at 10 a.m.

The event,  which brings out the best in zombie fashion, was originally conceived, organized and produced by Jason Meehan in the fall of 2008.

Hearing stories from friends about zombie walks in other cities around the world, and finding none in the Garden State, he was inspired to create one himself.

The event grew from a small gathering into a genuine zombie horde and has earned two Guinness World Record for the “Largest Gathering of Zombies.”

In 2015 the event was initially cancelled due to the difficulty of coordinating everything needed to host tens of thousands of zombies but, like any good zombie, it couldn’t be killed that easily. The Zombie Walk clawed its way out of the grave with the help of another local institution.

John and Mary McGillion of Johnny Mac’s House of Spirits in Asbury Park, couldn’t stand to see an Asbury Park tradition die, so they purchased the event and pitched in to help run it alongside founder Jason Meehan and the Asbury Park Chamber of Commerce.

The Asbury Park Zombie Walk is one of the Garden State’s largest and longest running Halloween gatherings. Zombies of all ages participate in this free, family-friendly event.

Starting at 10 am.  the official Zombie Walk Info Booth and Merchandise Stand will open in the Grand Arcade of Convention Hall. At that time potential zombies can stop in for a Zombie Makeover at the Pro Makeup Artist Alley. Participants are invited to attend in their own makeup or visit the Convention Hall makeup artists for a fee.

Thriller Dance Workshop at 1 p.m. If you ever thought about joining the Zombie Walk’s famous Thriller Dance Team and learning the moves, this is your chance. Team Leader Beth Bernardo will host a workshop directly outside of the Paramount Theatre near the Boardwalk. Learn the dance and join the Team for their performances later in the day.

The Jell-O Brain Eating Contest returns at 2 p.m. To celebrate the 10th Anniversary of the Zombie Walk  the organizers are reviving some of the original events! If you think you’re the fastest brain eater in the horde, Dark City Brewing Company and Kim Marie’s Eat and Drink Away want you to prove it! They’re making up dozens of Jell-O brains, and giving out cash prizes to the winners! There will be three races – Kids, Ladies and Gents – The contest will take place directly outside of the Paramount Theatre, spaces are limited so arrive early!

Win Big in the Costume Contest by being on the Boardwalk in your bloody best by 3 p.m.Judges walking the Boardwalk will be giving out contestant stickers, if you get one you’re a finalist in the Costume Contest! There are cash prizes from Johnny Mac’s House of Spirits for Best Child, Adult, Couple and Group costumes. Finalist spaces are limited for each of the four categories, so make sure your costume is outstanding – final judging will take place at the stage in front of Johnny Mac’s House of Spirits at the end of the Zombie Walk route.

All day long, zombies will gather on the Asbury Park Boardwalk in full costume and then, at 4 p.m. the Zombie Walk begins! From the front of the Convention Hall, zombies will lurch down the Boardwalk towards the Carousel House, where they will turn and invade the downtown. When the walk is over, zombies are turned loose to enjoy the music and festivities downtown. Johnny Mac’s House of Spirits will be hosting the Costume Contest Finals and Official After Party – with special guest DJs Johnny Catch and Kurt Lopez.

Zombies are also asked to lend a severed hand to a good cause. The Central Jersey Blood Center will again be hosting their Zombie Blood Drive. They’ll be parked outside the Paramount Theatre, ready for the undead to donate their blood (before it coagulates).