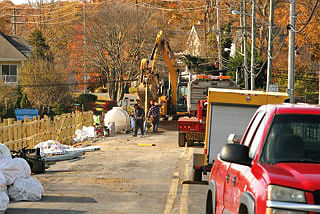 Many Neptune residents living in the Shark River Hills section of Neptune are finding it a little harder than usual to make their way home right now.

A $3.5 million grant from the state Department of Transportation, which includes a $300,000 contribution from the county for utility changes and upgrades, is paying for a project that will upgrade the East End Avenue Bridge, crossing the western end of the Shark River.

The bridge was recently closed and is expected to remain closed until almost Memorial Day. In the meantime it is creating some problems for residents to get home.

“It kills me. It kills everybody. It is a real inconvenience to the residents,” said Township Business Administrator Vito Gadaleta, who lives in Shark River Hills.

He said the bridge project and the related traffic detour, which reduces main access roads into Shark River Hills from three to two, creates a very “roundabout” alternative route with motorists having to use Brighton Avenue, either north or south.

“It easily adds a good 10 to 20 minutes to the commuting time and there are traffic backups at the Sylvania and Brighton Avenues signal- and that is being brought on by the detour,” he said.

But Gadaleta also points out that the project is “a necessity and has to be done.”

Another bridge in Neptune also will also be shut down for repairs beginning Dec. 1. The bridge on School House Road, between Neptune and Wall, will be closed for six to seven months. A detour will probably use Gully Road as an alternative route.

John’s Cracker Barrel, a deli, pizzeria and grille located at 1 S. Riverside Drive, is a business very closely located to the bridge closure.

“On weekdays we do not get the same amount of traffic of people going to work and we have lost a fair amount of business because this traffic is not there anymore. Literally, all of our traffic is going away from us now,” night manager Shea Eastwick said.

“Weekends are pretty much the same but weekday mornings we are really feeling it,” he said.

Eastwick said he does hear some complaints about the bridge closure from customers from time to time “but that people are getting used to it.”

“But it will certainly be better for us when the bridge is done,” he said.

The annual Holiday Tree Lighting at Volunteer Park, on S. Riverside Drive, will be held on Friday, Dec. 1 at 6 p.m.

The bridge was replaced in 1990 but a 2015 study showed increasing deterioration to the bridge that was also affecting the roadway and sidewalks. The project will replace most of the old timber with metal and have new black guardrails and decorative lighting on pylons that will be 75 feet apart. The elevation of the bridge will not change.