by The Coaster Editorial Staff
in Asbury Park, Special Features
13
VIEWS
Share on FacebookShare via EmailShare on Twitter 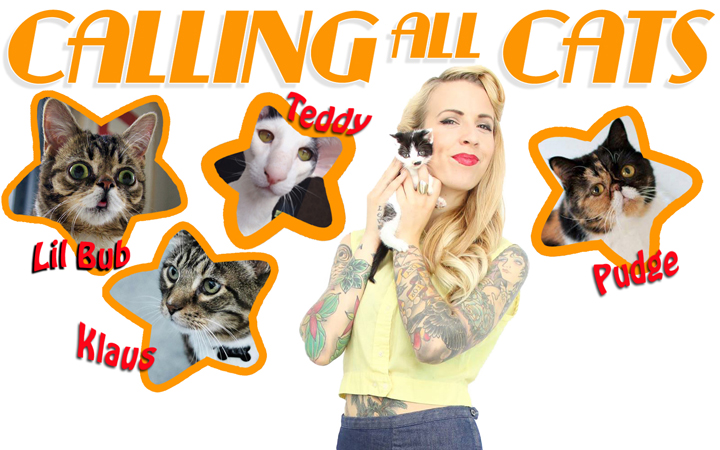 “Cats are in vogue,” declares Dean “DJ” Bornschein, speaking on a recent sunny afternoon just prior to yet another late-season snuggler of a coastal storm. “The 21st century is the century of the cat.”

While there are those in this passionately pooch-friendly city of Yappy Hours and canines-OK café tables who may sit up and beg to differ, there’s no denying that the age of fun-size digital cameras and globe-conquering social media platforms has elevated many examples of the domesticated CAT from hairball-producing homebodies, to internationally famous, instantly recognizable household names.

With that fact in mind — and with the mewy momentum generated by his recent opening of the Garden State’s first full-fledged “cat café” — Bornschein gets set to mark the town’s territory on behalf of all purry pets and their personal assistants, during this weekend’s first annual Catsbury Park Cat Convention.

Going on in and around Convention Hall and the Paramount Theater — an area where not so very long ago a community of feral felines made its home beneath the former Howard Johnson’s — the two-day affair looks to be the biggest such event on the east coast; a happening that boasts dozens of vendors of cat-centric products and services, plus info tables sponsored by animal rescues and other nonprofits, an on-premises SPCA adoption center, an art show, special guest speakers, games, activities, and of course a furry firmament of stellar celebri-cats.

It’s an A-list collection of red-carpet clawers highlighted by Li’l Bub, the one-of-a-kind, uniquely adorable “most amazing cat on the planet” whose journey from feral-runt rescue to viral-views sensation is the stuff of legend. She’s joined by Nala, the Guinness-record “most famous cat on Instagram,” as well as fellow fame kitties Pudge (“the girl with the mustache”) and Klaus (loyal sidekick to the late Oskar the Blind Cat). Representing the homegrown talent are Oriental shorthairs Teddy and Dexter, of Monmouth County’s own Hobbikats Cattery.

Two-legged guests abound as well, with the Berkeley Oceanfront Hotel hosting a pair of special talks (on kitten care, and the Trap-Neuter-Return [TNR] approach to feral population control) by rescue advocate and self-proclaimed “neonatal kitten warrior” Hannah “The Kitten Lady” Shaw, for which tickets are sold separately from the convention’s general admission. She’s joined by TNR specialist “Paul the Cat Guy,” and internet/ meme maven Amanda Brennan, in featured events that are accessible by GA ticket.

Proceeds from the weekend help to fund the ongoing operations of Catsbury Park, the Bornschein-owned nonprofit storefront dessert café and adoption center that opened last year on the fast-morphing “arts bloc” of 708 Cookman Avenue. Also designated as beneficiaries are two of the sources from which the café receives its resident cats — the Tinton Falls-based Associated Humane Societies of NJ, and the Jersey Shore Animal Foundation — in addition to Asbury Boardwalk Rescue, the Brodie Fund of Rumson, the Camden County Animal Shelter, and Paul the Cat Guy’s NYC-based organization.

An ambitious debut for the first-time convention promoter who notes that “other cat-related events are mostly boring seminars…this is a weekend that’s not just a cat event, but a fun pop-cultural event.” It’s furthermore a logical progression for a longtime Asbury-area guy who admits to having “spent most of my twenties not really growing up,” even as he logged ten years and countless thousands of miles as stage manager for Asbury Park’s own resident punk rock exponents The Bouncing Souls.

“I became an adult in my thirties, when I got a cat,” says the man who’s also been known to spin some spiral scratch (at such venues as the late, lamented incarnation of Asbury Lanes) under the name DJ Values. “…and I really fell in love with it.”

Turning his newfound passion for felines into what might be called his “purr-view” about three years ago, DJ established a home-based, not-for-profit cat rescue service that specialized in matching hard-to-place cats with new forever-homes through social media — and it while doing so that he took interest in the “cat café craze” then taking hold on the west coast. A fact-finding excursion to a handful of Bay Area establishments planted the seed of an idea, to the effect that such a thing could work in Asbury Park, given the right location.

A quick scouting led Bornschein to the Cookman storefront, home in recent years to earlier editions of both the Showroom cinema and the Asbury Park Music Foundation.  While the journey from the initial “coming soon” announcement to actual opening was a long one, the diligent DJ “wanted to do this the right way;” bringing New Jersey its first enterprise that serves up not only local-vendor desserts, teas or coffees in a sit-down setting— but furry critters “to go.”

Open every day but Tuesday, the café’s cat adoption center allows patrons to meet and mingle by appointment with an ever-changing collection of “totally socialized, totally loveable” residents; all of them at least one year old (the Catsbury crew does not accept newborn kittens or any other unsolicited drop-off). The “ready to adopt” cats— all of whom are examined by veterinarians, vaccinated, spayed/neutered, and “chipped” for identification — are obtained exclusively from the Monmouth County SPCA and other aforementioned reputable sources, with most of the temporary residents staying “an average of two weeks” before finding a new home.

Even a cat-allergic cat lover could conceivably enjoy a drop-in visit to Catsbury Park, since the resident cats remain fully visible, behind large windows and safely separated from the food area (equipped with a range of climbing and hiding places, the cat room features its own ventilation and climate control systems). Bornschein and manager Jamie Nichols (herself a resident of the Bouncing Souls’ “Little Eden” HQ on Fourth Avenue) also stand ready to purr-vey a wide selection of Catsbury-branded merch that runs from t-shirts, hats and sweatshirts to tote bags, stickers and beverage mugs.

“We love our cats — and we want our people to have fun,” says DJ of the event that stands as the Jersey Shore’s answer to the yearly CatCon in Pasadena, or the annual Cat Camp presented by TV host Jackson Galaxy  (“My Cat From Hell”). With a panorama of admission options that run from single-day or weekend convention passes, to individual tickets for guest presentations and “meet and greets,” there’s a cat for every cat lover, and a customized cat lover’s experience available at catsburyconvention.com.