A SPRINGSTEEN CONFERENCE ON THE EDGE OF TOWN 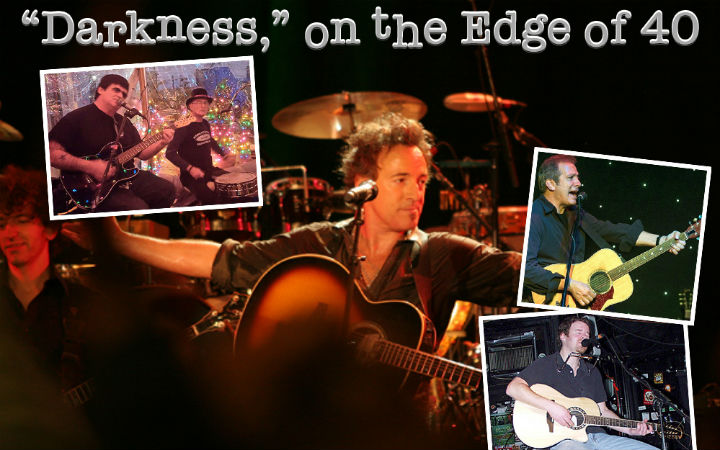 From the bins of Sam Goody and Record Town — to the win-an-album wheel games where so many life-changing LPs found their forever-homes — Memorial Day 1978 came and went without an official transmission from the Future of Rock and Roll. But from the boardwalk to the bars and the bedroom communities beyond, there was a palpable “Something in the Night” that said the world would soon hear again from Bruce Springsteen, the man whose Born to Run spun the scene off its axis in summer ‘75; shining a sudden spotlight on all things Jersey Shore, and shuttling its author to a realm of national magazine covers and radio rotations.

Of course, the Boss had spent those three years locked in a legal quagmire with his old manager, and unable to release new music; a case of careerus interruptus that would have proven lethal for any less grounded artist. But he had also spent that time in careful burnishing of a growing legend — gigging throughout North America; putting his stamp on those fine early albums by Johnny and the Jukes; hitting the charts through covers (Manfred Mann) and collaborations (Patti Smith); doing cagey cameos on records by Robert Gordon and Lou Reed; watching as a slew of popular bootlegs kept the fanbase energized — and working on a massive trove of songs that would eventually become his fourth long-player, Darkness on the Edge of Town.

When the album dropped on June 2, much of the world got its first look at a new, Schick-shaven Bruce pouting out from the cover of Darkness. Gone was the grinning wolfman in the po’boy cap; replaced by a Thinking Man’s Fonzarelli whose brooding challenge suggested that the truth wasn’t out there on the highway escape routes after all, but somewhere within the papered walls and drawn blinds of a room full of secrets — and that you’d have to go through him to get to it.

The sound inside the spiral scratch was at once instantly familiar but also transitional; the word-high poetic epics and one-act playlets beginning to give way to muscular mini-manifestos, in which those working-dude hopes and dreams were sparked with the seeds (and stems) of doubt— and extinguished within the somber ballads that smoldered each side of the record to a close.

That was forty years ago; several lifetimes removed in the roller-coaster ride of Asbury Park history, and an alien place defined more than anything by all that we didn’t see coming — not the least of which was The Promise, the 2010 box set of remasterings, recollections and revisited outtakes that served to illuminate and complicate a work that had become a part of so many listeners’ lives.

Beginning today, April 12, and continuing through the weekend, Monmouth Universityshines new light into the heart of Darkness, during a fan-friendly International Symposium of words, music, and history that commandeers some hallowed haunts around Asbury, as well as the MU campus on the edge of town.

While Monmouth co-hosted a pair of scholarly Springsteen-themed symposium events in 2006 and 2012 as a collaboration with Penn State, this is the first to be produced by the Bruce Springsteen Archives and Center for American Music, the on-campus resource directed by Eileen Chapman(pictured) — herself a pivotal presence in Asbury Park music history and, as a current member of the City Council, in the cultural life of the entire Asbury community.

A longtime administrator of the school’s Center for the Arts, Chapman recalls that “when I first heard Darkness, I felt that it was so different from anything Bruce ever did — he put away his rhyming dictionary for this one — and just so captivating as well.”

While she assumed oversight of the Bruce Springsteen Special Collectionof materials upon its move to a permanent home on the West Long Branch campus, Chapman is working as part of a panel of Conference Coordinators that also includes Mark Bernhard, Joe Rapolla, Michael Thomas, Syd Whalley— and Ken Womack, who as a Penn State faculty member was intimately involved with establishing the Springsteen events at Monmouth (and who now serves as Dean of Social Sciences and Humanities at MU).

Bruce fans who are hesitant to mix Circuit-rock spirit with scholarly study are assured that this year’s symposium offers a day rate admission policy for the first time; a $20 ticket whereby attendees can take in any single day’s offerings without having to sign up for the full event pass — an option that extends to any of several live music happenings keyed to the conference.

On Friday night, the live action moves to the Asbury circuit, as The Wonder Barhosts original Bruce-band beatmaster (and Rock and Roll Hall of Famer) Vini “Mad Dog” Lopez; performing with fellow Shore scene stalwart Gary Cavicoand a cohort of artists from Monmouth’s own Blue Hawk Records, in a sequel to a 2017 event that Chapman recalls as “a really cool, pretty amazing night of music.” The Pat Roddy Bandsets the pace for the 8 p.m. show, joined by the Belmar Horns.

The Pompeii Room at Wilson Hall erupts in a maelstrom of Americana at 6 p.m. Saturday evening, as a hootenanny of Monmouth students and faculty perform bluegrass renditions of songs from Darkness. Back in Asbury Park, go-to music historians Jean Mikleand Stan Goldsteinconduct tours of Bruce-related sites around town, from the still-standing (Stone Pony, Wonder Bar) to those covered by scaffolding (the former Upstage) or with us only in spirit. A pre-conference, four hour bus tour departs at 11 a.m. Thursday, with a Rock and Roll Walking Tour also offered at 10:30 a.m.Sunday.

There are plenty of words to chase that music, with a slate of featured speakers that include Brucebiographer and freelance entertainment journalist Peter Ames Carlin, as well as Dick Wingate, a music industry veteran who was an exec at Columbia during the time of Darkness. Celebrated photographer Frank Stefanko(whose sessions with Springsteen include the covers for Darknessand The River) and Grammy/Emmy winner Thom Zimny(a Boss-favorite archivist who has produced documentaries on Darknessand Born to Run) are also scheduled to appear, and a series of public-welcome panel discussions are set to include Jersey music journalists Bob Makinand Jay Lustig; radio personalities Michelle Amabileand Tom Cunningham; Shore musicmakers Vini Lopez andLisa Loeb, plus producer and entrepreneur Jon Liedersdorffof Asbury Park’s Lakehouse complex.

Take it to Monmouth.edu/brucesymposium for a complete schedule breakdown plus full details on registration, event admissions, transportation and more — and make a note to stop in at the Bruce Springsteen Archives, open to the public from 2 to 4 p.m. on Saturday and Sunday.