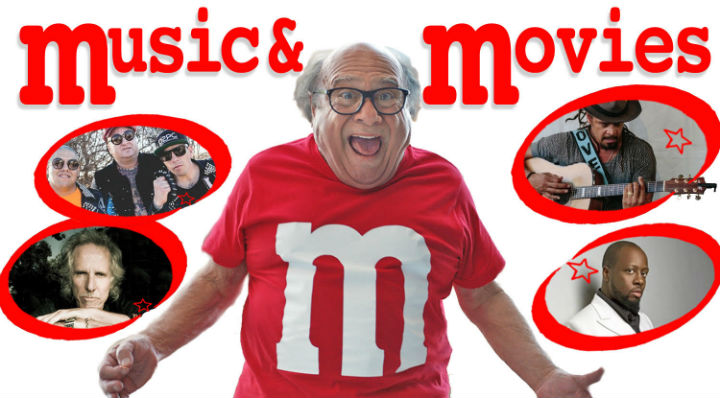 Danny De Vito’s at the center of an Asbury Park Music and Film Festival weekend that also brings to town such luminaries as (clockwise from top left) Sublime with Rome, Michael Front  Wyclef Jean, and John Densmore of The Doors.

It’s another multi-day convergence of sights/ sounds/ scenemaking in a town that’s never been shy about hosting them — from Lollapalooza, Skate & Surf and ATP, to this fall’s much-anticipated inaugural edition of See.Hear.Now. But if the weekend wingding known as the Asbury Park Music & Film Festival truly distinguishes itself from the pack, it’s in the variety of vaudevilles and venues involved; in the commitment to its concept and mission — and in the fact that it keeps itself equally grounded on the hometown turf, as well as the greater entertainment universe beyond.

Now in its fourth annual edition, the ever-evolving keynote to the pre-summer season commandeers the city’s concert halls, hotels, and Circuit landmark nightspots for an a-la-carte experience that runs between Friday, April 27 and Sunday, April 29. And you’re not imagining things if you recall that the event was originally branded the Music IN Film Festival — a name that ties in to the festival’s founding as one which “explores the role of music in film,” with a core mission “to benefit underserved youth in Asbury Park.”

That mission is accomplished through funding raised for the programs of the Asbury Park Music Foundation, the education-oriented nonprofit that relocated recently to the expanded Lakehouse complex on Lake Avenue. Proceeds from the Music & Film Fest benefit the APMF’s partnerships with such city-based entities as the Boys & Girls Club of Monmouth Countyand Hope Academy Charter School— a range of activities that introduce kids to a love of music through its playing, its recording, and its rich local legacy.

Of course, at the forefront of the festival is a frankly awesome assemblage of performing talent — and at the big heart of it all is an instantly recognizable public figure with unimpeachable Asbury cred; one who’s cut a huge profile over a decades-long career as an actor, director, and game-changing producer. Favorite son Danny De Vito returns once more to his seaside spawning/stomping grounds, for a Saturday night “Evening with…” presentation hosted at the Paramount Theater— the same place where the legendary local-guy-made-good hosted the world premiere of his directorial debut Throw Momma from the Trainin 1987; a stellar standout event in an altogether different era of Asbury history.

The historic Paramount auditorium is a centerpiece of the festival action throughout the weekend, with hip hop/ world music singer, songwriter and poet Michael Franti on hand for a performance and panel discussion keyed to the Friday night world premiere of his new documentary Stay Human. Allmans-vet guitar star Warren Haynes leads his jamband juggernaut Gov’t Muleto the concert stage on Sunday night — while in between those events, the adjacent Convention Hall opens its doors for a Saturday night set by Sublime with Rome,the legendary cult-fave ska/punk organization that joined forces with vocalist Rome Ramirez following the 1996 passing of original frontman Bradley Nowell.

Across the street from the ConHall complex, the one and only Wonder Bar becomes an upstanding institution of scholarly pursuit, thanks to a slate of panels (on the music/ movie connection, Women in Entertainment, and History of Asbury Park Music) on Saturday and Sunday. There’s music on that famous stage as well, with festival-affiliated shows featuring the aforementioned Dentist with Sharkmuffinon Friday; Low Cut Connie and Battery Electric on Saturday, and Kitchen Dwellers with Dark City Strings on Sunday.

Down the street at the Stone Pony, the Hardest Working Man in Shore Business — that’s Mr. Bobby Bandiera and his big black book of musicmaking Friends — saddles up once more for a Friday night show that also features the young musicians of the Lakehouse Academy. The Lakehouse Kids feature prominently in a very special Saturday night event with a star headliner — Jersey’s own Wyclef Jean, Grammy winning R&B/hip hop artist, founder of The Fugees, and a man whose previous visit to Asbury Park saw him working with the students of the Lakehouse-run Hip Hop Institute.

Downtown on the Cookman corridor, the House of Independentssounds a raucous earlybird keynote to the weekend festival, with a Thursday night concert starring that Pride of Idaho indie trio, Built to Spill. Friday night sees a rare area appearance by the North Mississippi Allstars, the next-gen roots rock powerhouse formed by Luther and Cody Dickinson, the sons of the late great session musician and producer Jim Dickinson. A Shore mainstay of formidably bluesy bona fides in his own right, Kenny “Stringbean” Sorensenis joined by The Stalkers for a rare hall-sized opening set.

The H of I also serves as screening space for several high-profile film offerings, including one that traces a direct line to one of the most legendary out-of-town acts to ever tread the Asbury boards. A Saturday showing of Break On Thru: Ray Manzarek and The Doors finds the documentary feature (unfortunately, sold out in its sole screening) introduced and discussed by Doors drummer John Densmore, with filmmaker Justin Kreutzmann. On Sunday, the House lights are turned down for a pair of matinee features on the rock world’s most iconic evergreens, Dylan Archives III and the Grateful Dead doc Long Strange Trip.

That music-and-film synergy extends to The Asbury Hotel, where the doc feature If I Leave Here Tomorrowdetails the story of Southern Rock linchpins Lynyrd Skynyrd on Sunday evening. Over at the venerable Berkeley Oceanfront Hotel, a Saturday slate of screenings includes the best of Project FX, the annual short-film competition sponsored by Red Bank’s Count Basie Theatre, as well as an encore look at the recent Academy Award winning foreign film A Fantastic Woman.

The story of Asbury Park and Music has always been too big to be contained indoors — and ditto the film screenings, as a “Festival Village” at Bradley Parkwill play host to a movie menu that includes the hip hop mini-doc The Pen Is Mightier Than the Sword, a best-of culled from the Atlantic Highlands Arts Council’s annual FilmOne Festivalof one-minute indies, plus a program of shorts that include such Asbury-centric fare as Adam Worth’s mini-doc on downtown’s Holdfast Records, the Stringbean-starring Bike Riddim, and George McMorrow’s Send It To Me, a music video starring the coastal-cosmo-country duo Williams Honor.

While they’re not part of the official slate of Music & Film Festival happenings, the weekend offers up plenty of other events around town that synch up with its spirit, including a Thursday night Pony show with son-of-invention Dweezil Zappa; a Friday record release celebration at The Asbury for the iconic Bebe Buell; a tribute to the music of the western movies by Jet Weston at Langosta Lounge; original Springsteen drummer Vini Lopez joining Paul Whistler for a Saturday stand at Robinson Ale House; “Half Shell” showcases of comedians and musicians at Palette Artspace, and a Sainted Sunday set by the singer-songwriter supergroup Sirens of South Austin. Check our What’s Up listings pages for the details on these and other local attractions.

For full schedule details, visit apmff.org, where you’ll also be able to purchase Student, Indie, and VIP passes for the screening events. Individual tickets for other APMFF-affiliated events are available either through the official website, or via the websites of various participating venues that include apboardwalk.com, theasburyhotel.com, stoneponyonline.com, houseofindependents.com, and wonderbarasburypark.com.