To dispense with the walrus in the room, right from the get-go: The Weeklings are nobody’s “Beatlemania” act. Their brand has nothing to do with brushing/ pressing/ shining their wigs and suits and boots — and everything to do with channeling the musically adventurous spirit of the original Fab Four. Their sonic signature isn’t so much a “greatest hits” gurgitation, but an exploration of the intriguing “inner groove” between the best-known works of Lennon and McCartney. And their canvas isn’t the county fair circuit, but the bigger wider world that extends from the premier clubs of Asbury Park, to the biggest international fan fests, symphony stages, and even the sacred soundboards of the one and only Abbey Road Studios.

Besides, when it comes to Beatle-booted bona fides, the Weeklings’ co-frontman Glen Burtnik has been there first, and done that finest; having played countless performances as Paul McCartney in the original Broadway production of Beatlemania. It’s a credit that the gold record recipient singer-songwriter-guitarist, who performs under the stage name Lefty Weekling, might be able to hold over his bandmate Bob (“Zeek Weekling”) Burger— were it not for the fact that attorney-by-day Bob can boast of having shared the stage with Sir Paul himself (as well as Jon Bon Jovi, Jimmy Buffett, and Pink Floyd’s Roger Waters) during a very memorable impromptu concert in 2007.

Having collaborated in years past on various tribute projects — and on several original songs that Burtnik brought to his two tenures in the platinum-plated classic rock band Styx — the two members in good standing of the Shore music scene entered into an official musical marriage in 2015; the same year that Glen married Christina Shafer on the stage of Asbury’s Paramount Theater in the middle of a marathon “Love Concert” benefit show (the newly minted spouses reportedly “walked the boardwalk in their suit and gown, and got boardwalk food” following the very public ceremony).

Completing their fab foursome with the addition of rhythm section aces John “Rocky Weekling” Merjave and Joe “Smokestack Weekling” Bellia— all veterans of Burtnik-organized Beatle Bash events at New Brunswick’s State Theater — the guys made their debut in a novel setting: performing on a moving trailer during the Asbury Park St. Patrick’s Day Parade. From there, the road would find the enthusiastic young band of seasoned cats appearing everywhere from outdoor summer freebies, to venerable theater-sized venues, to the Abbey Road on the River Festival in Jeffersonville, Indiana — an annual high-profile “Beatles-inspired five day music festival” to which the Weeklings return once more on May 25.

Before all that, however, the brothers Weekling play one for the hometown fans, when they take it topside to Tim McLoone’s Supper Club this Friday, May 18. Scheduled for 8:15 pm, it’s a classy affair — complete with VIP meet-and-greet option — that’s being pitched by Lefty as “something of a summer kickoff event for the band and the Jersey Shore.” And what a summer it promises to be, too; one that, among many other things,  finds the core four backed by the Nashville Symphony at that city’s Schermerhorn Symphony Center on July 22 (they’ll also be playing for fabulously FREE in the Downtown Freehold music series on June 7, and at Sayreville’s Independence Day celebration on June 30). 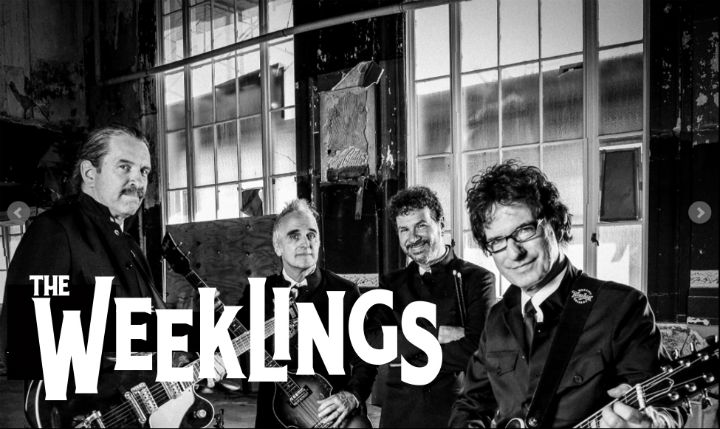 According to Burtnik, the symphony gig is a follow-up to an October 2015 show at Monmouth University, that found the quartet augmented by keyboards, strings, and brass section — an experience that the busy bandleader (who’s fronted some pretty big organizations during his Slaves of New Brunswick concerts, and his long-running Xmas Xtravaganza benefits at the Count Basie Theatre and elsewhere) seemed “fun and very successful.”

“It’s been a while, but since Nashville reached out to us to do it again, we figured it’d be an enjoyable experience…we’ll probably mostly be featuring the music of The Beatles and the George Martin arrangements.”

Of course, such one-step-beyond assignments are all in a hard day’s night for the rhythm ringmaster, who on May 6 returned to the Paramount stage for the fourth time as musical director of the annual New Jersey Hall of Fame Gala — an awesomely star-studded occasion that found Burtnik breathing the same air as Bruce, Steven, moonwalker Buzz Aldrin, NASA twins Mark and Scott Kelly, Frankie Valli and the Four Seasons, Governor Murphy, Debbie Harry, Gloria Gaynor, Cake Boss Buddy Valastro, and our own Village Person Felipe Rose.

And then there’s The Orchestra, the tirelessly touring juggernaut assembled by Electric Light Orchestra violinist Mik Kaminski, and dedicated to lushly live recreations of classic ELO hits. Burtnik is “still traveling all over the planet” as bass player and co-lead vocalist of the big band — that is, when he’s not performing as a member of the Weeklings, the Beatles tribute Liverpool, or with Burger and Merjave in Max Weinberg’s Jukebox, the fun E Street sidebar that hitches up to the Stone Pony on June 16.

“Max’s Jukebox is a blast,” says Burtnik, who puts his encyclopedic musical memory and pop chops to the test for the project, in which the audience selects from a potential set list of 300 to 400 songs — “although we have taken to playing ‘Little Elvis,’ since Max is such a big proponent of The Weeklings.”

That injection of original material into the Beatle-centric repertoire is a big part of what sets The Weeklings apart from the pack — that, and the fact that the band’s core mission was to explore the largely uncharted territory beyond the more obvious signature songs of John, Paul and George; both the “songs they gave away” to other artists, and the “lost” compositions that they never got around to recording in the first place.

Along the way, the savvy songsmiths deduced that theirs was an ideal framework in which to cultivate a set of new (or newly re-imagined) originals; this in a music-biz landscape that isn’t always accommodating to songwriterly singers — even one like Burtnik, whose catalog includes the chart-topping “Sometimes Love Just Ain’t Enough” (a Grammy-nominated record by Patty Smyth and Don Henley), the Randy Travis country hit “Spirit of a Boy, Wisdom of a Man,” the regional breakout “Here Comes Sally” (introduced by Burtnik as a member of Richie Rosenberg’s big-band brouhaha La Bamba and the Hubcaps), and the top-ten Styx hit “Love is the Ritual.”

“The successful concept and trajectory of The Weeklings was completely unplanned,” Burtnik insists. “As much as I’d love to take credit for designing this process of riding the coattails of the tribute band scene to create our own, successful, original project…we honestly can’t.”

“ As we grew in following, we figured we’d make a CD to sell at shows (the band’s releases include the long players Monophonic and the Abbey Road-recorded Studio Two…Bob ‘Zeek’ Burger and I had been successfully collaborating on song writing for years, so it was natural to expand The Weeklings’ reperatoire into including a few of our own tunes, written specifically with 60’s power pop in mind (as if the 80’s and 90’s never happened).”

“A year or two later, The Weeklings have original music being played on the radio everywhere,” observes the composer (whose most recent drops include the Weeklings single “In the Moment,” and the band’s full lengther Live at Daryl’s House Club, Volume 1). “It turns out we’ve become, to my knowledge, the only Beatles-inspired original act who’s busy playing and releasing records…all serendipitously. Go figure.”

While he understandably spends a good deal of his year in have-guitar-will-travel mode, Glen Burtnik brings it on home these days to Asbury Park; the musically minded town to which the celebrated and self-styled “Slave of New Brunswick” relocated about a decade ago — and whose music scene he pronounces “beautiful, healthy, vibrant and impressive…it’s kind of a baby Brooklyn here!”

Available tickets for Friday’s show by The Weeklings at McLoone’s can be reserved at timmcloonessupperclub.com. Glen Burtnik names his favorite Asbury Park bands, singers, songwriters and club in an even more in-depth version of this story, which appears at upperWETside.wordpress.com.