by The Coaster Editorial Staff
in Asbury Park, Special Features
4
VIEWS
Share on FacebookShare via EmailShare on Twitter 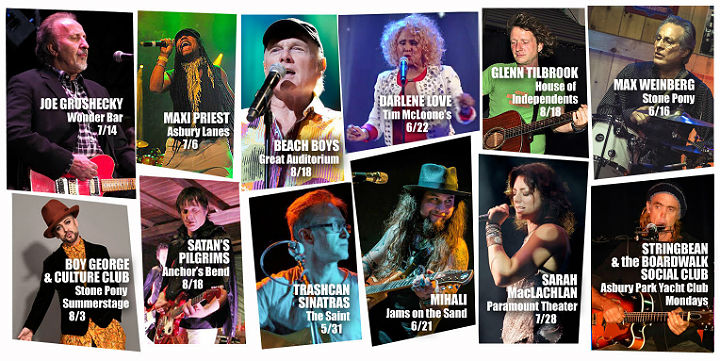 From the days of Arthur Pryor’s long-running seaside serenades, to the syncopated incubations of the legendary Springwood Avenue nightspots…and from those amplified guitarslingers who plugged into the Circuit during its 1960s-70s heyday, to the new generations of dreamers who seek their fortunes on our boardwalk, boulevards, barrooms and bowling alleys…Asbury Park has long been that unique little town that comes equipped with a soundtrack.

Granted, it’s a pulsebeat that emanates year-‘round from venues located throughout the downtown and waterfront…but the coming of summer turns up the volume and ups the ante on all that, as open-air bandstands, festival stages, and suitably flat surfaces transform parks, plazas, and prime portions of beachfront real estate into vehicles for musicians of all stylistic stripes to do their thing. It all begins in earnest this Memorial Day weekend…so here’s to every maker of sweet sounds who ever turned their sandcastle dreams into concrete reality in this city of summers (plus every awesome out-of-towner who ever made Asbury Park a must-play whistlestop on the never-ending tour), and here’s a round-up preview of all the sounds coming your way.

While their attempt to jump-start the season with a May 12 metal concert by Halestorm got itself postponed to August 6, the Stone Pony Summerstage opens the floodgates on June 1, with the latest in what’s becoming an annual pilgrimage by techy/jokey alternative power trio Primus. From there, the music blasts out into the night, sails over rooftops, and bounces off buildings courtesy of jamband juggernauts Umphrey’s McGee (6/30), the traditional summertime homecoming of Southside Johnny and the Asbury Jukes (7/7), the Asbury debut of 80s icon Boy George and Culture Club (8/3), a “Stoked Summer” set by Asbury’s own punk amabassadors Bouncing Souls(8/4), and lots more (stoneponyonline for tickets).

Returning to the Anchor’s Bend sandy stage on the North Beach outside Convention Hall is the Jams on the Sand series of free concerts, with festival favorite — and moonlighting frontman of Vermont-based Twiddle — Mihali floating the opening notes over the Atlantic on June 21; keynoting a summer-long schedule of buzzworthy young touring acts (including the DC funk ten-piece Aztec Sun, New York prog-reggae unit New Kingston, and Miami Latin jamband Locos por Juana) and turning the boardwalk into a balcony with the best view in town (jamsonthesand.com for info). Organ trio CB3 opens all events in the series as “house” band.
The Anchor’s Bend beach is also the hang-ten headquarters for the fifth annual Asbury Park Surf Music Festival, a phenomenon that the husband/wife team of Vincent Minervino and Magdalena O’Connell have nurtured into the “USA’s #1 Surf Music Event” from its humble origins inside the old Asbury Lanes. Now a three-day thrillerama (August 17-19), it’s a supremely stokeworthy whirl of pre-parties, afterparties, tiki brunches, and scholarly symposia whose centerpiece is a multi-band wordless workshop highlighted by Portland, OR instrumental monsters Satan’s Pilgrims (and keynoted by an 8/17 Wonder Bar encore by the King of the Surf Guitar, Dick Dale).

Returning to the boardwalk-side “First Avenue Green Space” for another slate of free Wednesday night concerts — sponsored by a consortium of Ocean Ave businesses, and benefiting the youth-oriented programs of the Asbury Park Music Foundation through donations — the Asbury Park LIVE series spotlights a range of acclaimed local bands (with opening sets by the students of Lakehouse Music Academy) in a soon-to-be-announced schedule that’s expected to kick off in late June (follow on Facebook or Twitter for updates).

One of the most exciting new musical developments of recent seasons was the seasonal series of free Music Mondays concerts at brand new Springwood Park, where pop/R&B paragons like Gary U.S. Bonds and Billy Brown of The Moments have teamed with a new generation of homegrown talents to bring the music back to the West Side neighborhood that’s nurtured and hosted some of the biggest names in jazz, R&B, doo wop and gospel. Check cityofasburypark.org for news on the schedule that’s set to begin on June 25. Then come out to Bradley Park on June 3, when the largest LGBTQ Pride Celebration in New Jersey returns with a daylong docket of activities that include a (to be announced) slate of musical guests.

Of course, we’d be remiss in not mentioning the annual return of the Asbury Park Concert Band, the multi-generational organization (under the direction of John Luckenbill) that traces a direct line back to those spectacularly popular performances by “Asbury Park’s first music superstar” Arthur Pryor a century ago. The band plays decades-spanning favorites on the boards outside McLoone’s Supper Club/ Robinson Ale House, Thursday evenings in July and August at 7 pm. 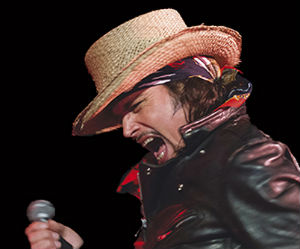 Adam Ant (right) makes a not-at-all-desperate and very-much-indeed serious July 21 stop on his summer Singles tour; just one of many high-profile happenings at Asbury Park’s venerable venue the Paramount Theatre.

Okay, it’s not in Asbury Park, but Ocean Grove’s nearby Great Auditorium has been a magnificent part of the musical mix for generations, both through its summer pop concert series and Summer Stars classical programming. The season gets underway with a pair of free-will-donation events, featuring the patriotic sounds of The Atlantic Wind Ensemble (5/26), and the Ocean Grove Summer Band (6/30) — and recently announced are shows by The Ultimate Queen Tribute (7/14), the return of Mike Love and The Beach Boys (8/18; pictured), and an all-star Doo Wop Extravaganza headlined by Jay and the Americans (9/1). Go to oceangrove.org for tickets, and watch for more added attractions for summer 2018.

Back on the boardwalk, the Paramount Theatre keeps the momentum going with the return of roots rockers The Mavericks (6/15), the annual appearance of the Happy Together Tour (6/30), the always entertaining Adam Ant (a 7/21 stop on his “Singles” Tour), bluesguys Buddy Guy with Jonny Lang (7/22) and Kenny Wayne Shepherd (7/31), Lilith Fair linchpin Sarah MacLachlan (7/28; a benefit for Mary’s Place by the Sea), pop perennial Dion (8/5), and a “Large Band” outing by country iconoclast Lyle Lovett (8/8). All this plus plenty of star-studded film and comedy events; take it to ticketmaster or apboardwalk.com.
Downtown Asbury’s ever-eclectic entertainment venue House of Independents sees in Memorial Day with a Sunday night event starring the dynamic Remember Jones in one of his unique big-band presentations; this an anniversary salute to Kanye West’s 808s and Heartbreak. It’s a gateway to a busy season of sounds that range from veteran troubadors (Willie Nile, Chris Smither, Squeeze frontman Glenn Tilbrook), to seasoned punks (GBH, Face to Face), songbook stewards (Chris Pinella), and record release events from local stars (Eryn Shewell O’Ree). Take it to houseofindependents.com for tickets and full details.

For months, the highly opinionated talk of the town has revolved around the imminent re-opening of Atom Age arty-fact Asbury Lanes, under a new management team and a style-conscious remake/remodel. With Friday’s set by The Cold Seas, the game becomes official — and the new/old venue makes an ambitious push into the summer season with  attractions like alt-songwriter Kurt Vile (6/12), British reggae artist Maxi Priest (7/6; pictured), and the Asbury return of insanely prolific punk/indie institution Guided By Voices (8/17). Much more where that came from, and tickets too, at asburylanes.com.

Out on Main Street, that boxcar berthplace of rock and roll The Saint brings Scotland’s Trashcan Sinatras (pictured)to town for two acoustic sets on May 31; part of a summer schedule that finds the club showcasing a bevy of original bands, from our Asbury back yard and the big world beyond. Watch The Coaster for the weekly rundown, along with music listings for such venues as Asbury Festhalle, Asbury Park Brewery, and Bond Street Complex.

Of course, none of this even mentions the debut of the Sea.Hear.Now Festival, a much-anticipated event that features the contributions of Jack Johnson, Incubus, Social Distortion, Blondie, and homegrown heroine Nicole Atkins. It happens on September 29-30…a story for another season, and another edition of The Coaster’s WHAT’S UP.