Asbury Park’s got Pride of Place this weekend 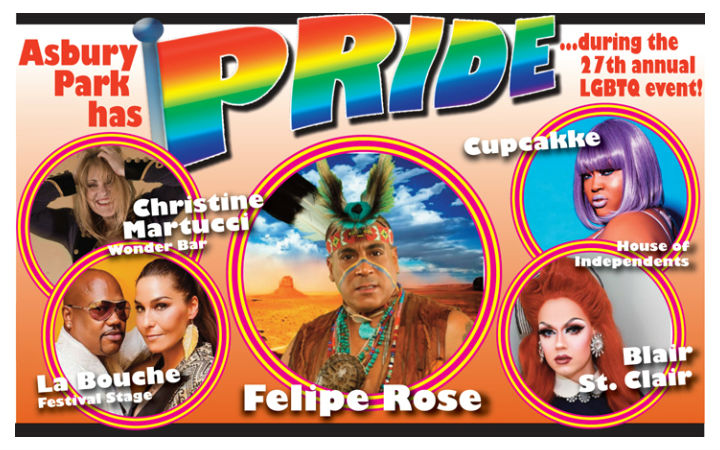 If it’s the first weekend in June — and it most certainly is, ready or not — then it’s time once again for the Jersey Pride Festival, the largest LGBTQ+ community celebration in the Garden State, and an all-welcome Asbury Park tradition that marks its frankly amazing 27th annual edition this Sunday, June 3.

Centered around a vividly vibrant and ever-growing parade — as well as an all-ages festival that brings a celebratory rally, a generations-spanning mix of live music, and a full day of hometown-fair style fun to Bradley Park — the event “allows us to showcase what’s truly special with the New Jersey LGBTQ community,” in the words of Jersey Pride president Laura Pople.

A co-founder of the nonprofit organization, and one of its longest serving volunteer members, Pople is part of a “core leadership” of twenty principals in the committee that assembles the big event on the threshold of summer, each and every year since 1992. She’s joined by an additional ten “junior leaders” and some 40 to 50 volunteers, with an estimated 25 percent hailing from the Asbury Park area.

Looking back on the festival’s origins, it wasn’t difficult for Pople and her fellow organizers to envision Asbury Park as the host city for the statewide event. The seaside resort that was “uniquely Jersey, centrally located, and had a community that was going to work with us” had struggled through decades of decline by the 1990s — but it also had a long history of gay-owned taverns, hotels and restaurants, even as the downtown business base dwindled, and the waterfront stagnated within a tangle of bankruptcies and litigation. By the end of the century, the old town’s gay club scene was largely the thing that had kept the lights on, and the music playing, through so many of the city’s darkest and most deathly quiet days and nights.

That strong connection to the community also spurred a considerable investment in the faded resort’s base of still-grand old homes — and as Asbury Park’s fortunes began to creep forward again in the new millennium, that level of commitment remained a crucial component in the journey from “ghost town” to a place that now regularly rates among the most buzzed-about vacation options in the region (and, in some cases, the world). Many of the old landmark nightspots met the wrecking ball, but the LGBTQ community was here to stay, represented prominently and proudly on the city council, in public service, on the frontlines of social activism, and within a business landscape that has helped redefine how a place of brick-and-mortar can survive and thrive in an age of challenges. A good case can even be made that the Pride Festival and parade, in their colorful and resolutely committed glory, have inspired and influenced attractions that range from the city’s St. Patrick’s Day Parade, to the Promenades of Mermaids, Zombie Walks, and numerous open-air celebrations of music culture that have taken their turns in the Asbury Park sun and sea air.

With an official start time of noon — and an estimated one and a half miles worth of marchers, floats, musical performers and more — the centerpiece parade commences from the City Hall parking lot on Main Street, heading east on Cookman and north on Grand Avenue, while working its way to the festival grounds at Bradley Park, across Ocean Avenue from Convention Hall. The festival area will be outfitted for the occasion with a portable stage, food concessions, vendor and informational booths, plus games, activities and rides for the youngest attendees — and the rain-or-shine festivities continue from 11 am to 7 pm, with wristband admission ($10, or $5 for students with valid ID) allowing access to the midway offerings, a celebratory rally, a display of one of the country’s largest memorial quilts in remembrance of those lost to AIDS, and the lineup of live entertainers.

And what a lineup it is, too; one that’s traditionally balanced an impressive roster of national/ international recording artists with a collection of local/regional talent that does justice to the Jersey Pride banner. Headlining for 2018 is the reborn configuration of La Bouche, the Euro-dance electronica duo that scored such 1990s club hits as “Sweet Dreams” and “Be My Lover” prior to the tragic air-crash death of singer Melanie Thornton. New vocalist Sophie Cairo joins original member Lane McCray on the festival stage, with emcee Porsche (from The Wanda Sykes Show) presiding over a program that also features Corey TuT, Alus, Liz Graham, 13-year old Broadway veteran Ava Della Pietra, and the local return of Monmouth County singer-songrocker Josh Zuckerman. Bridging the gap between the “local” and the globally legendary is veteran Asbury area resident Felipe Rose, known worldwide as the Village People’s longtime Native American icon. Most recently seen sharing the Paramount spotlight with moon-walking astronauts, moonlighting politicians, and swoon-worthy rock stars at the New Jersey Hall of Fame gala, the singer-activist and motivational speaker promises the Asbury audience a first live listen to his new single “Going Back to My Roots” (“showtime 5:00 pm, then Georgie’s 8:30”).

Just outside the watchful steely gaze of Founder Bradley’s statue, the organization has often worked closely with other local venues around town to bring in entertainers of interest to festival attendees. This year, the Pride vibe extends to the ever-eclectic auditorium of the House of Independents, which offers a Friday night concert featuring the young Chicago rapper Cupcakke, a steadfast supporter of the LGBTQ community (and a gleefully raunchy rhymesmith whose sex-centric lyrics can scarcely be name-checked in the proverbial family newspaper). Then on Saturday, the June 2 edition of the 90s By Nature Dance Party sees special guest Blair St. Clair (a Season 10 veteran of RuPaul’s Drag Race, and a newly minted recording artist in her own right) joining DJ Tyler Valentine at the tables of turn. Take it to houseofindependents.comfor ticket details and reservations.

Back on the waterfront, the Circuit landmark Wonder Bar welcomes back a homegrown paragon of Jersey pride, Christine Martucci, as the rock-edged singer-songwriter (who saluted her fellow military veterans at a Stone Pony concert a few weeks back) joins The Band of Love on a Saturday night bill that further features the Jean Navarr Band, Chix Appeal, and the Randy Haze Trio (wonderbarasbury park.com for advance tickets). Sunday’s wind-down of the Festival festivities is followed at the Wonder by a free 6 pm show starring the crowd-pleasing, roof-raising Kathouse, “NY/NJ’s Premier ALL Female Hard Rock Cover Band.”

DJ Tyler takes it over to the Asbury Park Yacht Club on the boardwalk for a Sunday afternoon Pride Dance Party that starts at 3 pm, while legendary record producer and remixer Shep Pettibone joins Hex Hector for a Pride Tea Dance at the Pettibone-owned Paradise that kicks off at 5 pm.

“This is an event that’s grown big enough to span the entire city,” observes Pople. “We have a terrific relationship with City Hall, and with the residential and business communities…being here in Asbury Park has given us the opportunity to offer our best representation of New Jersey.”

And, here in a fast-morphing Asbury Park that owes so much of its newly won cachet to Jersey Pride’s long-standing commitment, the annual festival has much to look forward to in future editions — particularly in 2019, a summer that promises “one hell of a Pride Month” during the 50th anniversary observance of the 1969 Stonewall uprising in New York. Stay tuned for that — and this weekend show your support for your neighbors; raise a glass to departed friends; cheer the spirit of all those who never gave up on Asbury Park, or the power of people working together.