SOUNDS: Trashcan Sinatras at The Saint

The Scottish band that’s marking its 33rd year of existence with a North American tour returns to Asbury Park’s boxcar berthplace of rock and roll (where they appeared as recently as last September) in an acoustic three-piece format TONIGHT, May 31, with a “One Night, Two Albums” program that finds the core trio (Francis Reader, John Douglas, Paul Livingston) performing their early LPs Cakeand I’ve Seen Everything in their entirety, as well as a selection of subsequent stuff. It’s a stay-seated, no-talking, “Asbury Café style” show — but fun, y’know? — and it starts in timely fashion at 7 pm, with tix (an eminently affordable $10) available at the door or thesaintnj.com.

STAGES: NEWSIES at the APAC

It was an oddball inspiration for a Disney musical — the real-life Newsboys’ Strike of 1899, a landmark of the American labor movement, and an event that impacted the legendary Newspaper Wars waged by media moguls W.R. Hearst and Joseph Pulitzer. While the live-action film Newsies didn’t enter the pantheon occupied by various animated classics from the mouse factory, it spawned a Tony-winning tunefest that comes to the stage of Ocean Township’s Axelrod Performing Arts Center as the latest offering from the Shore area’s newest professional stage company. Broadway veteran Marcos Santana (On Your Feet, In the Heights, Guys and Dolls) directs and choreographs the production that goes up for the first of 14 performances beginning Friday, June 1, with a young cast of pros delivering a score of songs by Alan Menken, the composer of such Disney favorites as Beauty and the Beast, Aladdin, and Little Shop of Horrors.

Jim Schubin tops the cast as Jack, leader of the newsboy resistance, with Katherine Plumber as intrepid and sympathetic reporter Lilly Elliot, and James Judy as the powerful Pulitzer. Of particular interest in the supporting cast are the celebrated vocalist (and originator of the Mary Wells role in Motown: The Musical) N’Kenge— and Patrick Tombs, a mobility-challenged (and exhilaratingly “abled”) actor-singer-cellist in his “bucket list” role as Jack’s sidekick “Crutchie.” The show continues through June 17 with a mix of matinee and evening performances, and ticket reservations ($37-$46) plus full schedule details are available by caling 732-531-9106 or visiting axelrodartscenter.com.

Hey, don’t look now, but an annual appearance on the Stone Pony SummerStage by the quirky/techy Bay Area power trio branded “quite possibly the strangest Top 10 band ever” is fast becoming as much a part of an Asbury Park summer season as “event rate” parking. Fronted by bass-slapping prankster Les Claypool (and once more boasting the classic lineup of Larry LaLonde and Herb Alexander), the festival-headlining act returns to Asbury Park for the first time since the drop of their most recent studio release The Desaturating Seven. Equipped with audio-visual-aid projections and a slew of slinky/ stompy/ steampunky signatures (“Lee Van Cleef,” “Wynonna’s Big Brown Beaver,” and the monumental radio-wrecker “My Name Is Mud”), Primus breaks that there Pony with the help of Grammy-nominated Southern prog-metal monsters Mastodon. Tickets ($44.50 advance, $55 day of show) available at the Stoney box office or stoneponyonline.com.

It’s a rainbow sighting across Wesley Lake — because if it’s Pride Weekend in Asbury Park, then it’s time once more for Rainbow Festival, the annual “Celebration of LGBTQ+ Theater” that offers its 2018 edition at Ocean Grove’s Jersey Shore Arts Center. A presentation of La Strada Ensemble Theater — the intrepid little collective of Shore-based performers and playwrights (founded by artistic director A.J. Ciccotelli) that’s transformed the third-floor space at JSAC into something of a best-kept-secret for new original plays on themes of human interest.

Saturday night sees a Young People’s Company production of Bert V. Royal’s edgy take on Charles Schulz’s beloved Peanutscharacters, Dog Sees God: Confessions of a Teenage Blockhead.  Directed by Ashley Friedman, it’s an examination of addiction, depression, suicide, violence, rebellion and sexual identity, prompted by the spiritual crisis of aging Charlie Brown stand-in “CB” in the wake of his dog’s death. The play ‘s presented for a single 8 pm performance — then at 3 pm on June 3, following the Pride parade in Asbury Park, Frank Calo hosts a Rainbow 2018 Cabaret that boasts “sketches, singers, comedians and odd talent,” plus “the ever-popular Auction of Strange and Wonderful Items.” Tickets to individual performances are $18, with three-day festival passes for $45 (and some substantial discounts for seniors and students). Reserve at lastradaensemble.org, or call 732-455-2748 for more info.

Pride means never having to apologize for being Disco — and if Disco has a founding-father figure with unimpeachable musician cred, it’s Earl Young, the 77-year old Grammy-winning drummer whose distinctive style set the pace for many a 1970s classic Philly International/SalSoul side. As leader of The Trammps, Young saw his danceable R&B sound achieve chart-topping immortality with “Disco Inferno” (and his heavy-on-the-hi-hat technique supercharging the soundtrack of many a night-fevered dance floor) — and on June 2, he moves his 2018 edition of The Trammps on up to Tim McLoone’s Supper Club, for an 8 pm Saturday Night special that offers up some satisfyingly soulful old-school harmonies, and also boasts a guest appearance by pedigreed vocal powerhouse Layonne Holmes with Jeff Levine. Call 732-774-1155 for ticket info and reservations. 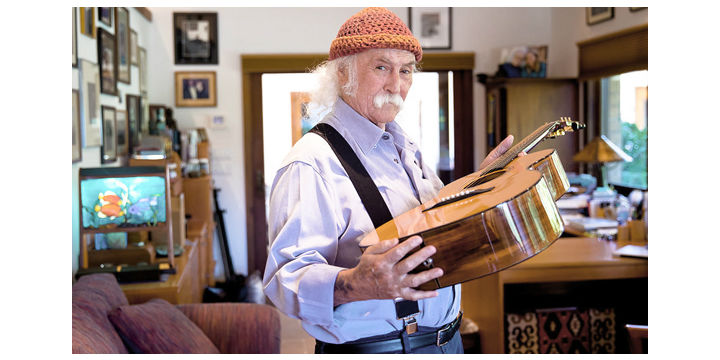 For a man whose personal relationships, health issues and legal troubles have been the stuff of headlines, there’s still much to be discovered about David Crosby, his ongoing love affair with creating music, and the social activist’s passion that keeps him using that celebrated voice to speak out and sing on behalf of refugees, victims of violence, and the ones who are forced to live in a state of permanent war. On June 7, the coastal New Jersey audience will get a fresh look at a vital artist for whom, maybe now more than ever, “Music Is Love.”

While he may not have been a “Long Time Gone” from the Monmouth University campus (he appeared as recently as 2014 at Monmouth’s MAC arena with Crosby, Stills & Nash), the 76-year old Crosby is currently on his most extensive solo tour in years — and he comes to the Pollak Theatre nextThursday, on the heels of “the densest, longest writing surge I think I’ve ever had.”  It’s an excursion in support of Sky Trails — his third album of new material in four years, and an acclaimed exploration of a jazz-inflected new sound — with Crosby joined by a five-piece band featuring his son James Raymond on keys. Expect to hear such Crosby-penned CSNY classics as “Guinnevere,” “Wooden Ships” and the title track to the Déjà Vualbum, as well as vintage solo compositions (the anti-war anthem “What Are Their Names”), and a new listen to “Triad,” the controversial Byrds-era song that was famously rescued from obscurity by the Jefferson Airplane.

Still, with so much new material under his belt, it should come as no surprise that recent sets have been anything but frozen-in-time oldies revues, with the inspired new songs painting a portrait of a constantly evolving artist who keeps his focus on the future — even as he approaches his seventh decade as a working musician in excellent voice. Tickets for the 8 pm show ($51 and $66, with a Gold Circle seating option of $81 and available VIP options) can be reserved through the Monmouth University Performing Arts Box Office at 732-263-6889, or online at monmouth.edu/arts.