MAX WEINBERG IS THINKING INSIDE THE (JUKE)BOX 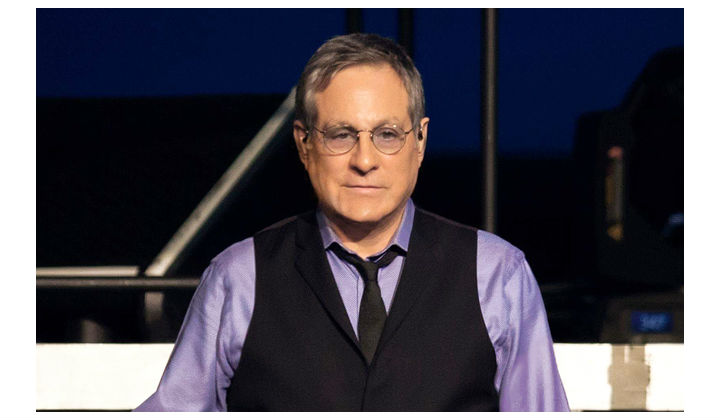 In a seven-day Asbury interlude that boasts no less than Bruce Springsteen among its headlining musical attractions, why opt to spend Saturday night hovering over a jukebox stocked with very-well-played 1960s and 70s hits?

Why? Because the hit-dispensing device in question is Max Weinberg’s Jukebox, the people-pleasing project personally curated and conducted by Max Weinberg himself. For this raucously retro-rocking (and hyper-currently interactive) touring attraction, the dapper timelord who’s long steered the back of the firetruck for the E Street Hook ‘n Ladder Company has secured the expert services of Messrs. Glen Burtnik, Bob Burger, and John Merjave — together comprising three of The Weeklings (profiled a few weeks back in this space), and collectively joining with Mighty Max to form a Kollege of Musical Kno’ledge whose fab faculty wrote the book when it comes to encyclopedic mastery of the rock, pop ‘n roll canon.

With a setlist determined by the audience’s choices from a video menu of some 300 songs (including a bunch of Springsteen selections, although no “Born to Run”), the act that takes the stage of the Stone Pony on June 16 claims its immediate origins in an idea from Weinberg’s manager Mark Stein — plus a bit of acknowledged inspiration from a 1986 Elvis Costello tour, in which the set was shaped by spinning a giant Wheel of Songs. But its roots draw from every aspect of the drummer’s career; from his singular stewardship of the E Street beat, to his long tenure as a network talk-show bandleader, and (perhaps most importantly) his formative years “growing up as a Jersey musician.”

“As a drummer, playing those 9 pm to 2 am club dates, you had to know how to play everything…Dixieland, cha cha, merengue…and whatever was playing on the radio, which was extraordinary eclectic in those days,” says the North Jersey native who famously honed his chops in contexts that ranged from Broadway pit orchestras, to one of the region’s leading bar mitzvah bands.

“I enjoyed impersonating other drummers…and I had a knack for where if I heard a song just once or twice, I’d learn it.”

With his early pre-Bruce forays into the land of the fast-thinking, hard-working cover bands — and his 40-plus years affiliation with a superstar songsmith who’s never been shy about working some of his own fave record-party oldies into his live sets (“Quarter to Three,” “Twist and Shout,” “Wear My Ring Around Your Neck”) — Weinberg bore unique witness to the universal power of a well-placed, generational touchstone tune. And when the “classic Jersey bar band” found itself performing for crowds of more than 100,000 in places like Barcelona, another special bit of dialogue between musicians and audience began to manifest itself.

“In Europe, people started carrying signs, with the titles of their favorite Bruce songs, in hopes he’d play their request…this morphed into ever more elaborate creations, with all kinds of lights and decorations,” recalls Weinberg of the euro-tours that would find locals trying to “Stump the E Street Band” with requests for things by Chuck Berry and Dobie Gray. “The best ones are actually kept by Bruce…he’s got a warehouse full of them.”

Then there was the long-running gig as TV bandleader for Conan O’Brien; an “incredible experience” that found the Max Weinberg 7 backing the likes of B.B. King, Al Green, and Martina McBride; playing James Brown onto the stage in classic style; doing a spontaneous performance with Tony Bennett on almost no advance notice — and, perhaps most memorably, joining Isaac Hayes for a breathtaking full-band arrangement of the theme from “Shaft.”

“Being called upon to do comedy also helped me learn to be fearless,” adds the sartorially splendid skinsman who fulfilled a bucket-list dream, when he (ever so briefly) got to lead the “Tonight Show” band during the show’s Conan era. “It was another step toward finding the confidence to do the Jukebox shows, which are designed to work particularly well in places where adult beverages are sold.”

“I’ve done about 70 shows with these guys, who know about every song ever written — including ones that aren’t on our list,” says the Mighty One of his Weekling cohorts. “For example, when somebody called out for Led Zeppelin’s ‘Rock and Roll,’ John Merjave came through with a great vocal…and we wound up adding it to the set.”

In the midst of a tour that’s brought them to big-city venues from coast to coast, Max Weinberg’s Jukebox returns to the circuit-side staple that hosted one of its crucial early dates (“it was a gas; packed with people”) — in the process of bringing Weinberg back once more to “the building where I played in 1967, when it was Mrs. Jay’s…they actually had go-go dancers in cages.”

“I’ve been playing Asbury Park since 1965, and I am delighted to be witnessing the rebirth of the town,” says the veteran music maker, citing the “incredible program” at Lakehouse Academy as a prime factor. “For me, being booked to play the Pony feels like looking forward to going to Florida in the winter…you really look forward to it, no matter what time of year it is.”

Tickets to Saturday’s concert by Max Weinberg’s Jukebox ($40) can be purchased at stoneponyonline.com.