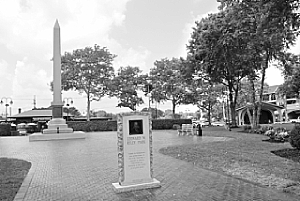 After months of renovations and improvements, Riley Park in Bradley Beach will reopen to the public on Sat., Aug. 11.

The borough will hold a reopening ceremony at 6:30 p.m., followed by a performance by the doo-wop band The Cameos.

The federal government helped pay for the changes through a $142,000 Community Development Block Grant administered by Monmouth County officials.

Borough Administrator Kelly Barrett said much of the work was aimed at improving handicapped accessibility and increasing the amount of grass surfaces in the park.

“We removed the staging from in front of the monument and put a new bandshell in the northwest corner of the park,” Barrett said. There is more room for the public to gather in front of the bandshell than in the previous location of the stage, she said.

Pavers were removed from the center of the park and around the fire department bell and fountain, and more user-friendly pavers were put in and leveled off, Barrett explained.

The gazebo in the park was relocated to allow more room for holiday events. Flower beds were installed around the bell and fountain.

Barrett said the bandshell was 95 percent complete. A shipment of siding from the midwest has been delayed and is expected to arrive on Aug. 20.

Mayor Gary Engelstad presented the borough’s plan for the improvements to a competitive proceeding in Freehold in August 2016. The borough’s application was ranked third out of the six which were approved a month later.

In March of this year, the council awarded a contract for the improvements to the second highest bidder.

Borough Engineer Gerald Freda said the low bidder asked to withdraw because he misunderstood the bid specifications and would not be able to meet the borough’s requirements.

Since the bond arrangements for the project had already been made, Freda reduced his engineering fee to no more than $29,000.

The council awarded a contract of $275,525 to Black Rock Enterprises of Old Bridge for the work at the park.

“There’s been quite a few obstacles to overcome and we have,” Freda said. “It’s looking really nice out there.”