They Came Saw, Heard at the Beach

by The Coaster Editorial Staff
in Asbury Park
1
VIEWS
Share on FacebookShare via EmailShare on Twitter
By JOANNE L. PAPAIANNI 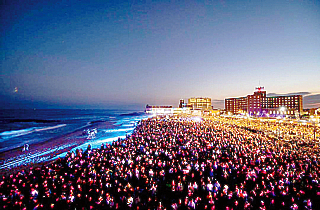 It was an event which won accolades from those who attended along with officials who praised organizers of the Sea.Hear.Now music festival in Asbury Park, saying the two day event ran smoothly despite the 25,000 people who arrived each day.
City Manager Michael Capabianco, who attended the festival described it as a “fantastically run event by a first class company.”
Organizers gave the city $75,000 before the event and will also reimburse them for police presence.
In addition organizers will give the city $2 for every ticket sold at the festival which drew estimates of between 20,000 and 25,000 people.
Capabianco said the exact number of tickets sold will not be known for at least two weeks.
Cindi D’Onofrio, Asbury Park said she had never been to a concert that was so well planned and orchestrated.
“Not once did I see one piece of trash on the ground, it was  a seamless event.
She also said she was thrilled to see Blondie perform.
“ Blondie was on my bucket list,”  D’Onofrio said.
She also travels often to Jamaica and enjoyed seeing The Whalers in her city.
“And Bruce showing up on Sunday night was not too shabby either,” she said.
D’Onofrio also said she regularly picks up trash on her property and was expecting there to be much after the weekend but was pleasantly surprised.
“I expected this weekend to be a nightmare, but there was not one piece of trash on my property. I live nearby and the way they handled the trash was amazing,” she said.
Councilwoman Yvonne Clayton could not have been happier with the event.
“I had a wonderful time and I couldn’t get over how well organized it was…their attention to detail,” she said.
Clayton cited the Rock and Recycling program where those who wanted to volunteer were given blue plastic bags for picking up recyclables. They then brought them to a specified area and were given a festival T-shirt for their efforts.
There were also water stations where concert goers could refill their water bottles.
Clayton also said she had not heard one complaint from attendees or residents about the festival.
She spoke to residents of North Beach Asbury who live close to the main stage and said none of them had any complaints.
Organizers, she said, had spoken to the residents asking them about the Bamboozle festival to find out what they did not like about that one.
Clayton also remarked about how well behaved the crowds were.
“Police said we didn’t have a lot of drunks and traffic moved smoothly. I just have to commend the organizers.”
She also noted that performers were all on time and took to the stage according to schedule making it  easier for people who planned to see specific acts.  A special treat for her was seeing The Whalers perform as well as Blondie.
Fire Chief Kevin Keddy said he was there the entire time and also commended organizers for a clean, well run event.
The Fire Department ran the EMS services and Keddy said there several minor injuries, cuts, scrapes and a sprained ankle. Also six people were transported to the hospital but not for serious injuries.
“That’s not many people for a crowd of 25,000 on both days,” he said.
Keddy has been on duty for many other music festivals, including Bamboozle, and said this one was superior.
“It was a very well run event by comparison,” he said. “It was a well run machine.”
Kenny Sorensen, aka Stringbean, attended the event with his wife, Caitlyn, and preschool age daughter and said they all enjoyed the festival.
“We loved it, we thought it was great,” he said. “We went the entire time both days…it was so well run.”
Sorensen said he enjoyed seeing Blondie and especially Shark River Hills resident Lee Foxx who is the band’s bass player.
Sorensen also played at the after party at Transparent Studio at The Asbury Hotel, which is run by festival organizer Danny Clinch.
“We are looking forward to next year’s festival,” he said.
The festival featured three stages: Bradley Park and two stages on the north end of the boardwalk.