The Casino on the Asbury Park boardwalk still remains, although a shell of its former self, and basically unchanged since the eastern part of it was demolished in 2006.

Beach goers stroll through the walkway into Ocean Grove but the building is nowhere near the way it was in its glory days when it was built 90 years ago.

At that time it replaced the wooden structure which had been destroyed by fire.

“Madison Marquette’s vision, since its inception on the Asbury Park Boardwalk, has been to honor Asbury’s history while creating a waterfront experience unlike any other,” the statement said. “We have conducted structural exploratory work and stabilization of the Casino (both pre- and post-Sandy) and are in the process of reviewing our architectural and engineering studies.” 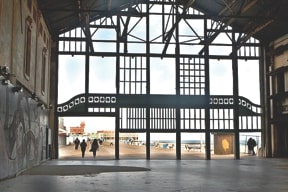 They also said their vision includes redevelopment of the building with a combination of retail, dining and entertainment while maintaining the spirit of the original architectural design.

At an Asbury Park Homeowners Meeting a year ago iStar Senior Vice president of Land and Development, Brian Cheripka  was concerned that development partner Madison Marquette had not begun to rehabilitate the Casino and Carousel building sites.

Both are a about a block away from 1101 Ocean Avenue the site of iStar’s Asbury Ocean Club Surfside Resort where luxury condominiums are being sold for more than $1 million.

Mayor John Moor said the city has been having monthly meetings in the last six months about the Carousel building but nothing about the Casino building.

Moor’s main thought regarding renovations however is, “The sooner the better.”

The part of the Casino that was east of the walkway had been demolished in 2006 and some decorative items were salvaged.

But the building has been standing in the current state since then.

Musicians often set up in the walkway and perform for donations during the warmer months and Madison Marquette has set up photo or sketch exhibits of its plans for the boardwalk pavilions.

Moor said, “As much as there’s nothing on the table now we hope there will be in the future.”

Moor also said he hopes the Fourth Avenue pavilion on the boardwalk is finished soon.