New Mode of Transportation Planned for Summer in Asbury Park 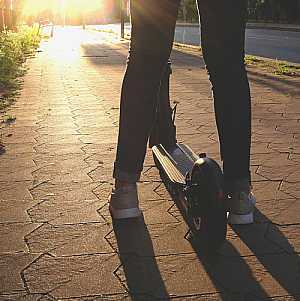 In time for the summer beach season there may be a new emobility option of transportation for people visiting and enjoying Asbury Park.

Escooters are the new wave of vehicles that according to Director of Transportation Michael Manzella will fill a unique niche for those who don’t want to drive and do not know how to or like to ride bicycles.

The benefits Manzella said are reduction of traffic and congestion and reducing the need for parking spaces. The vehicles, which are battery operated, do not go over 19 miles an hour.

They fit the niche for those going from one place to another that is too long to walk but not long enough to bother with a ride share.

“They fill a unique niche as they have started to grow around the country,” he said.

Manzella said they offer an option to an underserved group in areas where there is no public transport. They also havea less emissions that regular vehicles.

The average cost of a trip is $3, Manzella said.

Manzella said when they began becoming popular in 2017 there were no local regulations and the scooter companies began dropping them off throughout towns and cities.

“They dropped off hundreds or thousands and created a problem with people riding on sidewalks” Manzella said.

Hoboken is the first city in New Jersey hoping to provide the scooters.

The scooters are currently being used with success in Portland where 60 percent view the scooters positively.

The study found that 71 percent used the scooters for transportation and not recreation.

The New Jersey legislature introduced a bill March 14 under Title XXXVIIII regulating vehicles. Gov. Phil Murphy must sign the bill by May 13. The guidelines include riding in bike lanes and not on sidewalks. Each town will craft its own ordinance.

Cities are creating virtual stations with enough room for racks and are lined out on the street with GIS fences which would force riders to end their trip at a station.

Brad Erickson a representative from Zagster, which provides the bike share program said the scooters have been used in Canada for 11 years.

There will also be staff hired to monitor the scooters and collect them at night and take them to a charging station to be recharged.

Riders will also be rated and bad behavior such as vandalizing the scooters or not returning them will be recorded and riding privileges may be suspended.

Councilwoman Eileen Chapman said she had just returned from a trip to Los Angeles and noted, “They were pretty popular there.”