by The Coaster Editorial Staff
in Ocean Township, School News, Sports, Uncategorized
13
VIEWS
Share on FacebookShare via EmailShare on Twitter 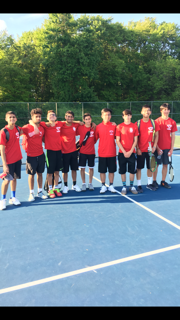 The banner will honor the Spartans’ boys tennis team, which won its fourth straight Shore Conference Class B North title.

“This year’s team was so successful because of its experience and commitment,” said Jeff Reisler, the Spartans’ 15th-year coach. “This year’s seniors have played so many matches over the past four years that they are able to concentrate on their game and block out the pressure.”

“Several of our seniors spent their summers with the youth program and continued to improve their games,” Reisler said. “The teams in the division change frequently, but we have had a respectful, competitive rivalry with Wall Township and Red Bank Regional for several years.”

Junior Rahul Sobti played first singles for the second straight season. He was 11-10 this year.

“He played against eight players who were seeded among the top 32 in the state,” Reisler said. “Despite playing against great players, Rahul is a warrior. He keeps the point going and is relentless as he never seems to tire.”

Senior Karl Sequeira played second singles after three straight years at first doubles and was 14-4 this season. He will attend the Rutgers University Honors Program.

“It was Karl’s mission this season to play singles,” Reisler said. “He played with incredible consistency. Karl used a great approach shot and his volleying skills to finish points.”

Senior Daniel Du, bound for the University of Pennsylvania of the Ivy League, played four season at singles. He was 18-1 at third singles this year after competing in the second slot last season.

“Daniel added power to his already consistent game this year,” Reisler said. “He was able to hit many baseline winners.”

Senior Andreas Huey played first doubles after competing at third singles last season when he was named the team’s Most Valuable Player. Headed for the Rutgers University Honors College, Huey was 18-3 at first doubles.

“This season, doubles was a work in progress,” Reisler said. “Andreas improved throughout the season.”

Senior Max Pardon, who will attend Cornell University, was a four-year starter at doubles, seeing action at first doubles this season.

Senior Xianghao Jiang was named the team’s Most Valuable Player this season, teaming with sophomore first-year starter Joe Koutsoutis to post a 19-2 record at second doubles. Jiang will play for the Brookdale Community College Jersey Blues.

“Xianghao mentored Joe and led us to two 3-2 victories with his match being the deciding match,” Reisler said.

“Xianghao served and volleyed and was incredibly aggressive at the net. He played with passion and got every ounce out of his ability. Joe has a fantastic backhand and was receptive to Xianghao’s leadership.”

Reisler said the Spartans were fun to coach.

“A veteran team, this year’s Spartans did not need motivation to succeed,” he said. “The boys came to practice March 1. They immediately began competing for berths in our starting lineup. Many of the boys are close friends. That made the competition more fierce.

“The players loved to play. Often, they would stay after practice to hit. They have given themselves a sport for a lifetime. The seniors leave behind a legacy of determination, competitiveness and success.”
The Spartans boys and girls teams played their home matches outdoors at the Park Avenue Tennis Center in the Oakhurst section of Ocean. The girls compete during the fall season.

“The PATC, which opened last fall, was incredibly generous with its open court space to our teams,” Reisler said. “We wish it incredible success.”

Contractor Sentenced to Probation For Theft in Ocean Township

In Ocean Township Close Race for School Board