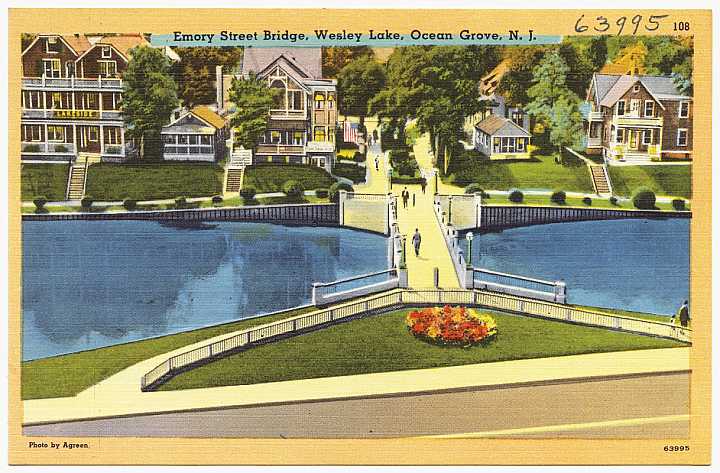 Preliminary plans are underway to make repairs to the two historic footbridges over Wesley Lake between Asbury Park and Ocean Grove.

The Wesley Lake Commission is taking steps to preserve the bridges and plans to contact contractors for a low-cost solution to seal the cracks and paint the bridges with a special sealing concrete paint.

The iconic concrete bridges, originally built in 1932 and depicted above in a period postcard, have suffered from decades of harsh weather and the lack of basic maintenance.

According to the commission’s statement, the porous bridges are stained and cracked, with water infiltration widening the cracks year-by-year. Large chunks of concrete have become dislodged and the steel rebar in the structures is exposed in spots.

“In a twist of cruel irony, the common rationale for doing little to maintain the bridges has long been that they are ‘historic assets,’ and that therefore any work needed the intervention of the state Office of Historic Preservation (SHPO),” commission member Doug McQueen said.

“The result has been that Neptune and Asbury Park have done little or nothing in 30 years to maintain the bridges. Sadly, the results speak for themselves,” he said.

Research by the Wesley Lake Commission revealed that, in fact, the bridges are currently not listed in either town’s historic inventory, making basic maintenance less complicated.

“Split between the two towns, the repair cost should be a fraction of what should have been spent in ongoing maintenance over the decades” McQueen said.

On the Asbury Park side, City Manager Michael Capabianco has suggested developing bid specifications this fall for the work to be done next spring, according to the commission statement.

Controversy still surrounds metal gates on the Ocean Grove side of the bridge that are locked from midnight to 5 a.m. The Wesley Lake Commission is recommending that the bridge gates remain off for a trial period after the renovations to see if there are notable changes in safety or security.

“The commission would like to see the improvements to the bridges as a first of many incremental steps to improve the environment around the lake,” McQueen said. “With a little effort, maybe we can return historic lighting fixtures to these bridges next year and begin to make them the shining assets that they really are.”