Ocean Grove at 150: Groundhog Day at the Boardwalk

by The Coaster Editorial Staff
in Ocean Grove 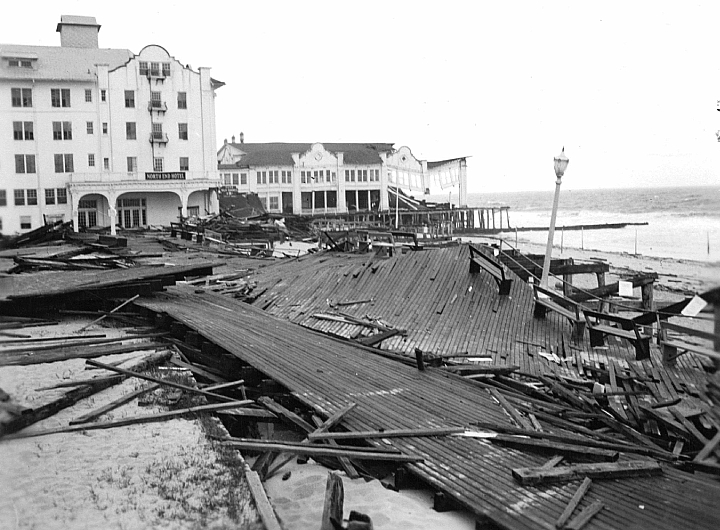 In a Pickle Over Pickleball in Ocean Grove

Fundraiser for Group That Ensures A Beautiful Ocean Grove Future

Superstorm Sandy left a scar on the Jersey Shore that’s still healing. The ferocity of the destruction seemed to underscore the fragility of the unique ecosystem which forms our littoral life and bond with the Atlantic Ocean.

In Ocean Grove, Sandy tore away the boardwalk and washed its famous fishing pier out to sea.

As traumatic as that was, when planning for future resilience it’s important to remember – we’ve been here before.

Welcome to this special series in The Coaster taking a look back at Ocean Grove as it celebrates its 150th anniversary. It will run sporadically through the summer and look at aspects of Grove history through a different lens. This week, we look at the storms that have shaped – but never re-shaped – Ocean Grove’s special boardwalk.

Ocean Grove’s boardwalk is unique in that it is resolutely non-commercial – notwithstanding an odd food concession on the sand throughout the years or its North End Pavilion building (now sadly gone up in smoke). Also, in a throwback to more pious times, it remains closed to bathers on Sunday morning.

Nonetheless, it has suffered the vicissitudes of Mother Nature along with the rest of the Jersey Shore – but as any Grover will tell you, it hasn’t actually happened unless it has occurred in Ocean Grove, frequently yet geographically erroneously referred to as God’s Square Mile.

So, before Sandy, the following storms also wreaked havoc up and down the coast of New Jersey, but when you turn 150 years old you can rightfully claim it’s all about you.

As it was in 1944, the first time Ocean Grove’s boardwalk was destroyed.

The Great Atlantic Hurricane of 1944 followed the legendary Hurricane of 1938 but is largely forgotten history. However, it ripped through Ocean Grove and destroyed most of its boardwalk and inflicted heavy damage on the North End Pavilion for good measure. 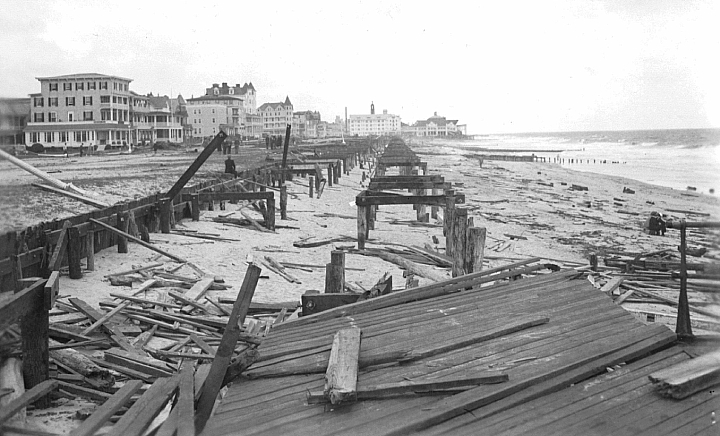 In photos unearthed for this series from the New Jersey State Library digital archives, you can see the extent of the damage. The photos were shot by New Jersey state troopers on the scene following the catastrophe.

That week’s Ocean Grove Times reported that there was $300,000 in damage in Ocean Grove (in 1944 dollars). The headline declared, “Entire boardwalk destroyed.”

The story went on below, “Private cottages and hotels miraculously escaped with only minor damage. The shift in the wind to the northwest at the height of the hurricane served to hold the tidal wave and the seas that seemed to be coming in at the height of sixty feet…”

Someone obviously was looking down on Ocean Grove.

In a day before any really stringent environmental regulations, portions of the boardwalk were pulled out  of the nearly seven inches of sand that covered Ocean Avenue and reduced to ashes in a spectacular bonfire in the south end parking lots by the Neptune Fire Department. 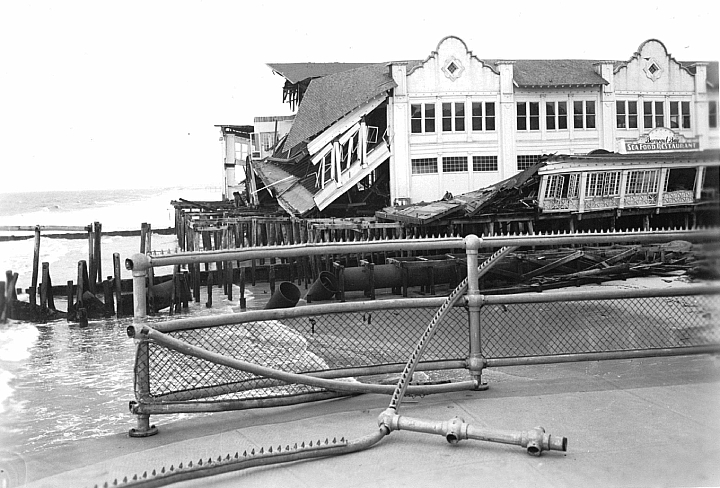 The Times reported a week later that the Camp Meeting Association vowed to rebuild the boardwalk, and that many Grove businesses pledged substantial amounts of money to aid recovery efforts. Grove hotels even planned to institute a special room tax dedicated toward rebuilding.

In the end, the new boardwalk cost $100,000 and was completed just in time for the summer ‘45 season. A dedication ceremony was held on Friday, June 29, where it was noted that reconstruction had actually been completed 21 days ahead of schedule.

And so the boardwalk once again served as Ocean Grove’s promenade – until it was ripped out again in late 1992.

Unlike the Great Atlantic Hurricane of 1994, many readers may remember the powerful Nor’easter of December 11, 1992. It tore up the Shore – and it, too, took a chunk out of Ocean Grove.

The fishing pier went out to sea. This time – in a 24-hour cable news world – that was broadcast across the nation and generated headlines in many places. However, while the clubhouse was lost, new pilings which had been installed by the Ocean Grove Fishing Club the year before at a cost of $23,000 remained – a ghostly skeleton stretching out over the sea after the storm had passed.

Likewise, sections of the boardwalk actually remained in place – but were so cruelly twisted and bent the remains were nothing more than a bittersweet reminder of what had been before as seen in the private photo collection of the author which accompanies this story.

Ocean Grove Camp Meeting Director Jim Lindemuth estimated that in total, the nor’easter would carry a $3 million clean-up and repair price tag. He probably wished it was 1944 instead of 1992. 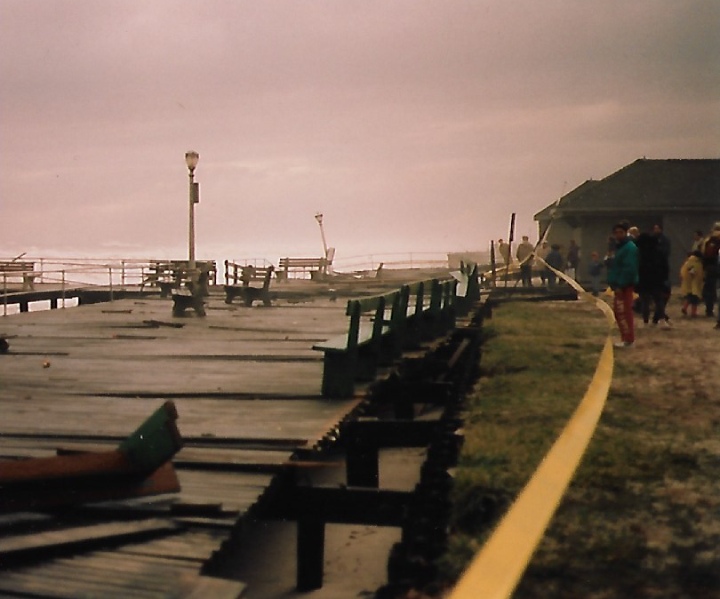 Once again though, the rebuilding would happen. Yet this time, perhaps in a reflection of the more complicated society Ocean Grove inhabited in 1992 instead of 1944, FEMA funding was necessary to complete the job. It wasn’t just inflation that raised the cost of rebuilding. The days of simply burning debris in a bonfire were long-gone.

A hard-won deal to secure those ‘92 dollars was necessary due to the special circumstances under which Ocean Grove’s boardwalk existed as both part of yet separate from outright governance by Neptune Township. Like the town’s land, the boardwalk is owned by the non-profit Camp Meeting Association.

While Ocean Grove’s boardwalk has recovered from every storm to hit it, that is the dark cloud that swirled over the boards long after Sandy struck. FEMA initially turned down Ocean Grove’s application for funds after the superstorm, but later relented. As in 1992, it just took a while longer than surrounding towns for repairs to begin. 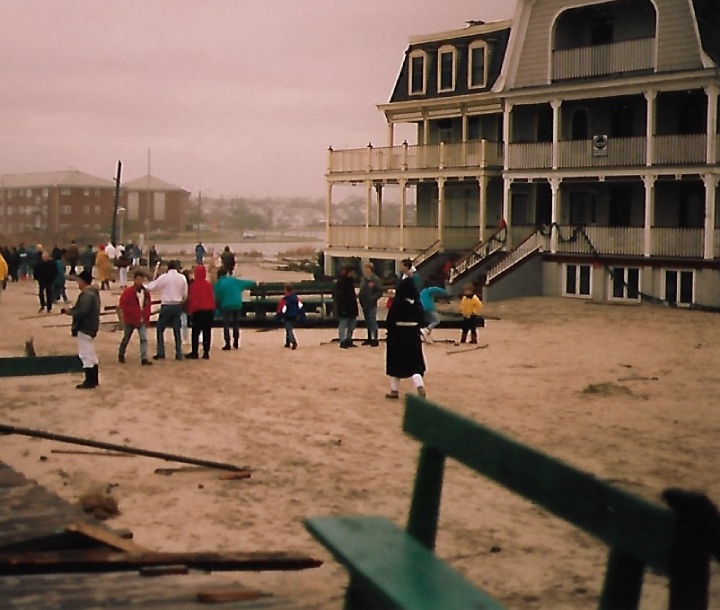 After the reconstruction of the boardwalk by the Camp Meeting Association with support from Grove businesses in 1944, it was almost 50 years before the task needed to be done again. After the nor’easter of ‘92, major repairs were required on the fishing pier after Hurricane Irene in 2011, and then of course following Sandy – barely 20 years after the last bit of carnage.

The rebuilt Ocean Grove boardwalk now is the result of a mix of Camp Meeting and FEMA dollars, as well as a significant amount raised by the “Together” campaign which brought together businesses, homeowners and civic groups.

It was like 1944 all over again, and just goes to prove that in Ocean Grove, the more things change the more they stay the same – and that can be a good thing.