Ocean Grove at 150: When an aeroplane landed on Main Avenue

Although its business district proper is small, Ocean Grove has been blessed by some beloved retail establishments throughout its 150 years.

Aside from its fabled hotels and guest houses, commercial enterprises of renown and special fondness helped create the emotional infrastructure of the Grove over time. Because the business district is only a handful of commercial blocks in the center of town, each unique place of business held or holds a sweet spot of affection in the imagination.

Of course, some are gone, or have altered through the years. But old-time Grovers still recall a Pathway Market that was actually a source for fresh meat and produce; a Stationary Store that sold all the local and national newspapers; and hold tight to the treasure that still is Ocean Grove Hardware.

Naturally, places to share a meal with family, friends and neighbors have a special place in people’s hearts. What would Auditorium Square be like without Day’s Ice Cream? Now also including The Starving Artist restaurant. Day’s has been a fixture almost as long as Ocean Grove itself, and their website states that it the town’s oldest continuously operating business.

Another Ocean Grove business that retains a place of fondness in memory had a far briefer run over on Main Avenue – yet left a lasting impact on Monmouth County’s culinary landscape that continues to this day.

It’s just happening across Wesley Lake on the shore of Asbury Park now, and it’s called Moonstruck. But, it was born and evolved in Ocean Grove.

At the very end of the 1980s, Luke Magliaro had an idea. To open a fresh, partially vegetarian breakfast and lunch spot. A fan of Ocean Grove, he found a Main Avenue location on the main business block and soon The Raspberry Café made its debut. 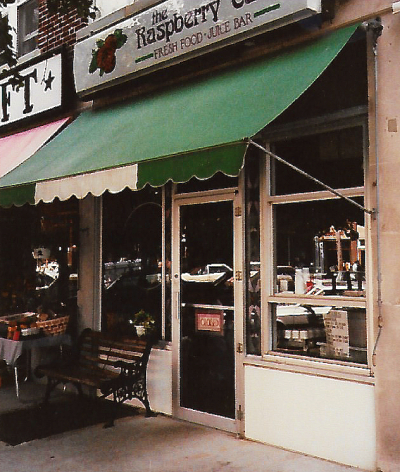 It was five booths, maybe a dozen counter seats – and an innovative menu which included such exotic (for the time) items like bean sprouts on sandwiches, a superior veggie burger, and a hummus plate. It also boasted a fresh juice bar.

It was a smash success. For several years, The Raspberry Café attracted patrons from not just the Grove, but from all around Monmouth County. Soon, outdoor tables arrived in the spring and summer months.

By the mid 1990s, the tiny kitchen struggled to keep up with demand – and contain the culinary ambitions of Magliaro and his soon-to-be partner Howard Racziewicz in a new venture, a fine dining restaurant across the street at 57 Main Avenue called…Moonstruck.

It was another smash hit. And soon, it’s breakfast and lunch forbear The Raspberry Café had to make way in order to allow Magliaro and Racziewicz the time to concentrate on the thriving Moonstruck.

It was only about five years before Ocean Grove’s Moonstruck had to make way altogether for the huge Lake Avenue Moonstruck we know today – a pioneer in a still-struggling Asbury Park around the turn of the last century. Today, it’s one of many eateries in a resurgent city, but still leaves diners from throughout Monmouth County moonstruck – as did The Raspberry Café so many years before.

Moonstruck is the one that got away; Nagle’s Apothecary Café is the Ocean Grove institution that still means Main Avenue, at the corner of Central Avenue. Its history stretches all the way back to 1901. As an apothecary, a pharmacy, a lunch counter and an ice cream stand.

That history includes one of the more memorable events to happen on Main Avenue in Ocean Grove. Nagle’s owner Lenny Steen explained what that was in a newspaper ad back 2005:

“Back in the late 1940s, former Nagle’s soda jerk Ed Brown went to his buddy, a model plane aficionado named Wes Nagle, with an idea.

“‘Wes, I learned how to fly with the military. This December, let’s fly a plane along the ocean, land on Main Avenue, taxi up to the corner and deliver Santa Claus to the kids of Ocean Grove in front of Nagle’s.’”

And they did just that. And it’s how an aeroplane landed on Main Avenue, Ocean Grove.

To the great sorrow of many, Ocean Grove is enduring a summer without Nagle’s in 2019. As Steen told The Coaster, “I am heartbroken that there is a health issue (with another person). We never stopped at Nagle’s until this came along,” he said. Indeed, since its re-opening in 2000, Nagle’s, at 43 Main Avenue, has been open all-year-long from 9 a.m. until 8 p.m.

He went on to say, “I can’t wait to come back and I want to thank every person in Ocean Grove who sent us letters, cards, or just came knocking on the door saying thank you.”

Its temporary closure is a poignant reminder of the special place Nagle’s holds in the hearts of so very many Grovers and visitors to the Jersey Shore. Especially after its stunning and heartfelt renovation almost 20 years ago by Steen and company into the beloved restaurant, soda fountain and ice cream stand it is today.

If history proves anything, it is this: Nagle’s will once again take flight with all the love and grace of Ocean Grove beneath its wings.