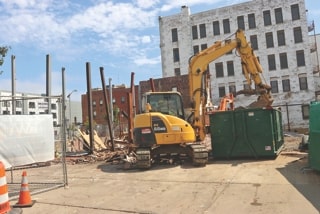 Coaster Photo – The building, formerly called the Appleby building at the corner of Main Street and Mattison Avenue in Asbury Park, has been taken down. Renovations to the building had been approved for a new bar restaurant, Mary Mac Libation Station. Owned by John McGillion who also owns Johnny Mac House of Spirits next door, the renovations were approved by the Planning Board for a multi story establishment but when construction began two weeks ago the city construction official declared that the building had to be  demolished instead.