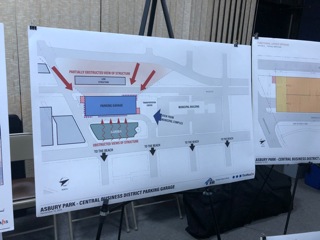 The favored design for a four-story parking garage in Asbury Park calls for constructing it in the parking lot next to the train station off Main Street.

The Main Street rain garden would not be disturbed in the plan and would be a visually appealing foreground for the building.

During a hearing on the proposed parking garage last week James M. Zullo AICP, CAPP of Tim Haahs and Associates left out sticky notes and markers so people could leave comments for the design team, architects and engineers.

Zullo addressed the room and said T&M Engineering would be doing their due diligence, including  gatheirng ground and geo technical information and conducting a traffic study.

“That’s a big part of understanding the feasibility of this design,” Zullo said.

Zullo also said the company was mindful of being cost effective as well as acknowledging the unique character of Asbury Park.

“Asbury is a very vibrant and design-focused community,” Zullo said.

Two versions of the basic plan were presented, one with the NJ Transit bus loop on the ground level underneath the structure and one outside the structure.

Zullo said designers would be working with NJ Transit regarding the best area for the bus loop.

He said there would also be Uber and Lyft stations on the property.

One aspect of the garage is that it will be able to be used for future development of both business and residential properties if needed.

Architect Michael Nelson from Clarke, Caton and Hintz presented renderings of several facades which included pictures of past projects with red or green brick and white concrete.

Also there are shafts for stairs and elevators made of aluminum and glass structures.

“You can do a lot with glass and aluminum as far as design,” he said.

He said the composite precast concrete and infused brick facade acts as part of the building’s structure requiring less pieces of building material.

Resident Jill Potter came out to see the design and said, “The location is great and that the rain garden is not going to be disturbed is fantastic.”

Councilwoman Eileen Chapman said the garage will also have bicycle stations which she believes will encourage more people to use mass transit.

“It will be well lit and safe,” she said.

Designer Reginald Piggee of Timothy Haahs said even with keeping costs down they tried to be as creative as possible.

“We want it to evoke emotion,” he said. “We want to design it right, so it won’t just look like a big block.”

He said the structure will inspire or influence future building in the city.

“Others take their cues from it; it radiates through the neighborhood,” he said.