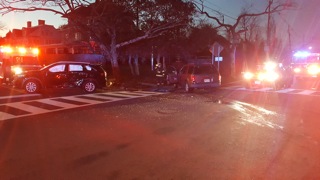 A car crash March 1 at 6:30 p.m. at the intersection of Allen and Norwood Avenues n Allenhurst resulted in a flipped car and one of the cars leaving the roadway and striking a tree.

When officers arrived on the scene they found one of the vehicles had flipped over and landed back on its wheels and the other vehicle had left the roadway, striking a tree.

The officers investigation found one of the drivers had entered the intersection without stopping at the stop sign.

He was issued a summons for failure to stop, with a pending court date.

“Police want to remind all motorists to wear your seatbelt at all times, regardless of how long the ride in the vehicle is. None of us know when, where or how a crash might occur and the seatbelt is one of the best protections one can use to survive any car crash,” said Chief Michael Schneider.