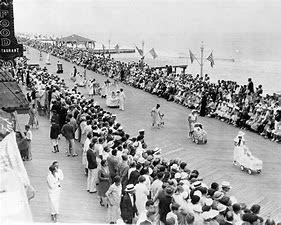 Asbury Park’s famous Baby Parades may be a by-gone memory, but perhaps not to everyone. Do you remember, or were you in, a baby parade?

Whether you’ve ever attended the event, which has had a few revivals, or recall anything about the parades, then Kate DelVecchio, a member of the Asbury Park archives committee, would love to hear from you. DelVecchio, a masters’ degree student in the Urban Studies program at Fordham University in New York, is researching the Baby Parade in preparation for an upcoming project on the famous event.

“If you remember what it was like to be there, recall hearing about it from others, or have photos and mementos, I would love to hear from you,” she said. There is an Aug. 2 deadline for providing information or artifacts.

The Asbury Park Baby Parade was created at the end of the 19th century by two city residents. The parade grew in popularity and eventually got national attention. Prizes could include a brand new automobile. The parade discontinued at various times in the 20th century, such as during World War II and the Korean War. After the Korean War, the parade was resurrected but did not last long. Another attempt was made to bring the parade back in the 1960s but, that too, did not result in much.

“In its heyday this was an Asbury Park event that received national coverage and it is an important part of Arbury Park’s history,” DelVecchio said. To contact her, send an e-mail tokathrynjdelvecchio@gmail.com or call 973-747-9568 by August 2.

“Any artifacts donated to the Asbury Park Historical Society will be part of an exhibit at the Hall of Records in Freehold in the future,” archives committee member Don Stine said.