by The Coaster Editorial Staff
in Asbury Park, Neptune, Ocean Township
5
VIEWS
Share on FacebookShare via EmailShare on Twitter

The Ocean Township High School Spartans’ Aidan Tisony is the picture of determination. Ocean downed Monmouth Regional 2-1 in overtime in boys soccer in Shore Conference Class A Central in the regular-season opener for both teams. Ocean won the match on a header by Michael Reid off an assist from Brian Mirando in the eighth minute of overtime. Teammate Shane Foster tied the match at one in the 74th minute. Aiden Hicks staked Monmouth to a 1-0 lead in the 64th minute.Ocean downed Monmouth 4-2 in the second match of the season between the teams in Class A Central. Peter Baillergeu led the Spartans with two goals. Tisony added one goal and two assists. Reid contributed one goal and one assist. Monmouth’s Kaan Pehlivan and Ryan Kuldanek netted one goal each. 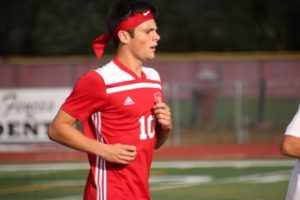 The following are the previews of the Asbury Park, Ocean Township, Neptune, Monmouth Regional and St. Rose high school teams.

Outlook: The Blue Bishops figure to field a strong team.

“We should be a very competitive team,” Nunez said. “We are young, talented and coachable.”

“This team is young,” Flavien said.

“We should be a very competitive team,” she said. “We are young, talented and coachable.”

Outlook: Teresi was a first-team Shore Conference All-Patriot Division selection last season. Another first-team all-division selection a year ago was Carasia, who averaged 25 yards per catch and scored six touchdowns. He caught 13 passes for 326 yards. Carasia, who has verbally committed to Lafayette College of the Patriot League, scored on two interceptions of more than 90 yards in 2019.

Garrett is a large specimen at 6-foot-2, 220-pounds. The offensive line returns three of five starters from last season’s Patriot Division championship team and is the club’s most experienced group.

“I believe we will have a competitive team,” Klein said. “We are healthy and hungry entering the season and our senior class is motivated to continue to add to our tradition of success. We are low on numbers, though, and with the physical nature of the game and the COVID-19 guidelines we must remain healthy and not lose any players to either injury or illness.

“Our team will be successful if we stay healthy and get consistent production out of our running game. We need to generate big plays. We have a good balance of returning experience at the skill positions and on the lines.”

At safety, Pena made 66 tackles and picked off six passes, returning one for a touchdown. He blazed with a punt for a touchdown and was a force to contend with as a kick returner. His 23 total touchdowns and 138 points scored tied for the most in the Shore Conference.

Assael suffered her losses in the semifinals of the Monmouth County Tournament and in the second round of the NJSIAA Tournament. She was a first-team All-Shore selection. Barofsky, a four-year varsity starter, also competed at third singles in 2018. Katz played the last two seasons at first doubles and was a second-team All-Shore honoree a year ago.

The Spartans’ captains are Barofsky and Katz.

“We want to be competitive in Class B North,” he said.

“My team, made up of mostly sophomores, is very young,” Bowles-Boone said. “I’m looking to build upon their strengths and speed and look forward to individual success.”

Outlook: Swartz and Balaoing are out for cross country for the first time.

“We are a work in progress,” he said. “We’re improving each year.”

“The boys are a hard working, blue collar group,” he said.

“We had a great turnout,” he said. “We have a host of new players.”