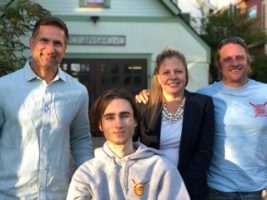 Ocean Grove lifeguard and his family outside their home which was renovated by the TV crew of “George to the Rescue.”

An Ocean Grove lifeguard injured last summer in a freak accident that left him paralyzed was given a gift that make his new life easier to navigate while he undergoes physical therapy.

Sam Jarmer, now 17, dove into the ocean on July 26, 2019 when a wave clipped him under his feet pitching him to the bottom of the ocean.

Nearby swimmers were standing in chest high water when the accident occurred.

“It was a freak accident,” his mother, Jessica Jarmer, said.

Since that time Sam has been living in a house left to the family by his grandfather, with 24-hour care.

But last week after a visit from the television show “George to the Rescue” Sam and his family have a whole new interior, renovated and fully handicapped accessible.

Jessica said the house is completely accessible to Sam and has been fully furnished for the family with a hang out room on the third floor for Sam, his brother Michael and sister Molly.

An elevator was installed and a ramp into the garage where Sam can enter and use the elevator.

On the day of the accident someone from the TV show happened to be at the scene. That  day Sam was standing in the water near the shore line monitoring the water when he decided to dive in for a swim.

One of the lifeguards on the beach saw what had happened and ran in to save Sam and called for help immediately.

“He remembers his body powering down,” she said.

Sam had surgery and was in the hospital for six days and then on to Kessler Institute in West Orange where he stayed for therapy before moving back to Ocean Grove.

He is making steady progress and is now able to stand, Jessica said. He also has full use of his arms but trouble with one hand.

“It’s a long road to recovery, but he is making steady progress,” she said.