by The Coaster Editorial Staff
in School News, Sports

A cancer victim and his family came away thousands of dollars richer.

Senior captain Charlotte Palumbo scored in the first overtime, giving the host Spartans a 1-0 win over Raritan in the ninth annual Mya Cup.

Palumbo drove the ball into the net from just outside the 18-yard line.

“It was a beautiful goal,” Ocean coach Cassie Della Pesca said after her Spartans earned the Mya Cup as the winning team.

More than $3,000 were raised for The Mya Lin Terry Foundation. Proceeds were generated by donations, mask and T-shirt sales and a 50-50 raffle. The money was donated to Ashton VanDorne, a 12-year-old Ocean cancer victim. VanDorne, who suffers from Medulloblastoma, a form of brain cancer, is a seventh grader at the Township of Ocean Intermediate School.

The event was created by the Spartans to show their love and support for Mya Terry, who died April 10, 2013 at the age of 10 after a 5 1/2-year battle with Non-Hodgkin’s Lymphoma and Secondary AML. She was a fifth-grade student at the Township of Ocean Intermediate School.

Terry’s mother, Kelly Lynn Terry, an Ocean resident who played for the Spartans in the early 1980s and is an event organizer, made pre-match remarks.

“We are pleased to welcome Raritan and are so thankful you are able to share this special tradition with us,” she said. “After her battle, Mya grew her angel wings. She continues to inspire us to make a difference and what better way to continue to honor Mya’s memory than to support other pediatric cancer warriors in our community as pediatric cancer is not rare. At this game, we are showing our love and support for Ashton, who unfortunately was not able to join us as he is in active treatment. However, I do see a few of our Ocean Township warriors with us today–Tori, Anna, Allison and Carter!

“A huge thank you to all of the Ocean Township families and friends who are supporting this event, especially in lieu of all of the accommodations we had to make to assure that the COVID-19 protocols are properly followed and that our attendees and teams remain safe. We thank Ms. Kazooba, Mr. Stefankiewicz, Mr. Todd, Mrs. Hagerman, our Mya Cup announcers (Tori Lee and Maggie Halsey) as well as all of the players, coaches and fans. Additional shout outs to Kasey Pickett, my sister, for assuring and enabling this event to take place every year and to Beth Conti for the amazing Mya Cup shirt designs every year. This night could not take place without your help.

“This is a fantastic tradition here at Ocean and I am proud to be a part of it–kids helping kids to kick cancer’s butt one game at a time.”

Mrs. Terry led a moment of silence in memory of her daughter and pediatric cancer angels Logan Parker and Matthew West. The latter two resided in Ocean. The Foundation has gifted more than $600,000 to the pediatric cancer warriors and their families.

In other news concerning the Foundation, the Ocean Township Mayor’s Ball has been moved from May 22 to Sept. 25 at The Gibbs Estate in Eatontown. 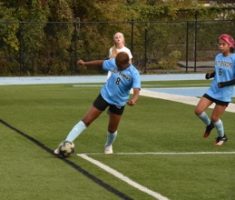 Ocean 21, Red  Bank Regional 15: Tyler Douglas ran for one touchdown and threw for another to lead the Spartans past the Bucs.

Douglas sped 40 yards for one touchdown and threw a 12-yard pass to Shane Garrett for another score. Christian LaRosa scooted 37 yards for an Ocean touchdown.

Manasquan 35, Neptune 14: Nino Bua scored on a short touchdown run and tossed a 33-yard scoring pass to Zahnier Hornsby-Carter for the Scarlet Fliers in their loss to the Warriors.

Neptune 34, Jackson Liberty 7: Shane Fallon, the Scarlet Fliers’ first-year coach, enjoyed his initial career win at the helm with a conquest of the Lions.

Keansburg 22, Asbury Park 16: Jai’Sun Brown completed 15 of 23 passes for 251 yards and two touchdowns for the Blue Bishops in their loss to the Titans.

One touchdown was a 15-yarder to Makai Brown-Jones. Another score was a 70-yarder to Najier Massey. Brown-Jones, who caught six passes for 86 yards, added eight tackles. Teammate Lydel Brown gathered in three passes for 60 yards.

Pickett stars: Ex-Ocean standout Kenny Pickett, a senior quarterback, completed 24 of 47 passes for 266 yards and two touchdowns for the University of Pittsburgh in the Panthers’ 31-30 overtime loss to Boston College.

Pickett, who left the game because of an ankle injury, tossed one interception. He rushed for 36 yards and one touchdown on 14 carries.

Ranney School 6, Keyport 1: Boyan netted three goals and added one assist for the Panthers (5-0) in their conquest of the Red Raiders (0-5).

Ranney School 5, Asbury Park 2: Boyan scored one goal and dished off four assists and Anyichie added two goals for the Panthers in their win over the Blue Bishops.

Redman and McCann each scored one goal.

Mater Dei Prep 2, Monmouth 0: Fatima Aw made 10 saves for the Falcons in their setback to the Seraphs.

Ocean 7, Middletown North 1: Taylor Cerafice scored three goals and Allison Tanasy added two goals and one assist for the Spartans in their conquest of the Lions.

Ocean 5, Middletown North 0: Pardon’s three goals and two assists led the Spartans past the Lions.
Tanasy added one goal and one assist. Cerafice added one goal. Ally Walk and Dobin each handed out one assist.

St. John Vianney 5, Neptune 1: Aaliyah Gerard turned in three saves for the Scarlet Fliers in their loss to the Lancers.

Freehold 5, Neptune 2: Ava Carlson and Majiah Foster scored goals and Janiya Clay added two saves or the Scarlet Fliers in their loss to the Colonials.

St. Rose 2, Trinity Hall 0: Sarah Peters and Colleen Ragan netted one goal each and Ella Rossetti added one assist for the Purple Roses in their win over the Monarchs.

Holmdel 27, St. Rose 30: Tilly O’Connor crossed the finish line first in 20:21, but it was not enough to prevent the Purple Roses from falling to the Hornets.

St. Rose 28, Holmdel 28: The Purple Roses bested the Hornets on a tiebreaker.

From the Desk of Acting School Superintendent