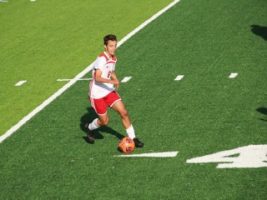 Ocean Township High School junior midfielder Dylan Gargulinski controls the ball. Ocean was 6-4-2 overall, including 5-4-2 in Shore Conference Class A Central, through its first 12 matches of the season. It was fourth in the seven-team division. The Spartans outscored their opponents 24-18. Photo credit: Melissa Gargulinski

Former Ocean Township High School girls bowling standout Jenn Ingulli has won an academic honor.
The Felician University senior women’s team’s star earned a berth on the East Coast Conference Commissioner’s Honor Roll. To be honored, a student-athlete must posted a cumulative grade point average of either 3.25 or better at the end of each academic year.

The Blue Bishops shredded the Huskies for 264 yards on 37 carries. Matawan led 17-14 at halftime before the winners rallied.

Asbury Park 26, Neptune 12: Jai’Sun Brown completed 15 of 23 passes for 164 yards and three touchdowns to lead the Blue Bishops past the Scarlet Fliers.

St. Rose 3, Asbury Park 2: Matt Kirkpatrick netted two goals and Morgan Fahy added one score for the Purple Roses in their conquest of the Blue Bishops.

Neptune 3, Matawan 1: Marvin Munoz-Garcia, Steven Camacho and Ernst Louisis each scored one goal and Cosmo Fierro added two assists for the Scarlet Fliers (7-7) in their win over the Huskies (5-9).
Monmouth 2, Passaic Tech 0: Bryan Leonard scored one goal and added one assist and fed freshman Anthony Cano for his first career goal for the Falcons (6-7-1).

It was Monmouth’s sixth straight victory.

St. Rose 1, Neptune 0: Ella Rossetti scored off a feed from Colleen Ragan and Anya Gloster made four saves for the Purple Roses (8-2) in their win over the Scarlet Fliers (0-13).

St. Rose 1, Trinity Hall 0: Caroline Nappo scored off a pass from Rossetti and Gloster made two saves for the Purple Roses (9-2) in their win over the Monarchs (3-3-1).

The meet consisted of 57 runners and eight teams. The Purple Roses were fourth with 114 points, Red Bank Catholic won the meet with 41 points.

Pickett on target: Former Ocean standout Kenny Pickett completed 21 of 27 passes for 210 yards and ran for one touchdown for the University of Pittsburgh in its 41-17 win over Florida State University.
He had missed the previous two games–losses to Boston College and the University of Notre Dame–because of an ankle injury. The win pushed Pickett’s career record to 14-8 as the Panthers’ starting quarterback against Atlantic Coast Conference competition. He’s a senior.

Profile of a Coach