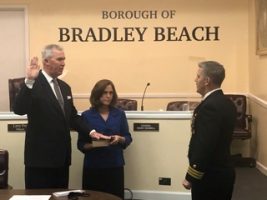 Coaster Photo
Larry Fox is sworn in as mayor of Bradley Beach Jan. 1.

Bradley Beach has a new mayor as Larry Fox took the oath of office Jan. 1 administered by former candidate in the 4th Congressional district Josh Welle.

Welle, who served in the United State Navy, was in full dress uniform as he administered the oath in the Borough Council chambers.

Only 18 people are allowed in the room due to the pandemic and members of the Fox family were in attendance, while other council members and the public joined the meeting on Zoom.

Before swearing Fox in for a four year term, Welle gave Fox advice he learned in the Navy.

“If you do the little things right, the big thing will be done right,” he said.

“It’s an awesome responsibility. I know you are ready for,” Welle said.

After taking the mayor’s chair, Fox said keeping the borough safe and secure is his main concern along with supporting the businesses and restaurants in town.

Mastering the Covid-19 virus is a major concern, he said,  promising the borough will be diligent in its response.

He also commended all the town’s first responders for their extraordinary measures in meeting the challenges of the pandemic over the last year.

Fox also announced that there is a preliminary proposal from a buyer for the movie theater and an analysis is being done for the best path forward for installing a community center in the newly purchased Methodist church.

Fox’s former opponent in the mayoral election, Al Gubitosi, was elected council president.
He started his report saying construction of a new borough website is underway and will be up and running by Memorial Day.

Gubitosi also said a formal complaint has been filed with the Department of Community Affairs regarding the borough’s 2019 audit.

During public comments, resident TJ Coan referenced the difficulties with the past year’s audit saying constructing the town’s upcoming budget  will be difficult without having the proper documentation.