by The Coaster Editorial Staff
in Ocean Township, Sports
3
VIEWS
Share on FacebookShare via EmailShare on Twitter 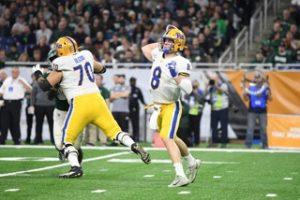 Former Ocean Township High School standout Kenny Pickett, the University of Pittsburgh’s star quarterback, said on his Twitter page he will return to the Panthers for the 2021 season.

“A lot of thought went into it,” said Pickett, who utilized the NCAA’s blanket waiver to return. “I am very excited. I talked to my coaches, my family and Peyton Manning about it. I am comfortable in finishing my last year at Pittsburgh. I appreciate all of the support my fans have given me. I have to get prepared for the fall season. I will hold my teammates accountable and we will play really, really hard.”

Pickett was one of the top signal callers in the Atlantic Coast Conference last season as a senior, completing 203 of 332 passes for 2,408 yards and 13 touchdowns in nine games. He missed two games because of an ankle injury. He completed 61.1 percent of his passes and averaged 267.6 passing yards per game. His longest pass devoured 75 yards. He threw nine interceptions.

The owner of a 129.6 efficiency rating, he paced the Panthers to a 6-5 overall record. Pittsburgh was bowl eligible, but declined to compete because of COVID-19. Pickett led the Panthers in rushing touchdowns with eight. He rushed for 145 yards on 81 carries. He averaged 16.11 rushing yards per game.

Pickett, a 6-foot-2, 220-pounder, owns a bachelor’s degree in marketing and is enrolled in Pitt’s Katz Graduate School of Business.

Kirkwood update: Wide receiver Keith Kirkwood, who starred for Neptune, the University of Hawaii and Temple University, caught one pass for 13 yards for the Carolina Panthers in 2020.

Slowe by a broken clavicle during training camp, Kirkwood played in one game.

Now on injured reserve, Kirkwood, 26, played under coach Matt Ruhle at Temple. Ruhle recently completed his first season as the Panthers’ coach. Kirkwood, a 6-foot-3, 210-pounder, is a three-year pro. The Panthers signed Kirkwood as a free agent prior to the 2020 season. He made the New Orleans Saints’ roster as an undrafted free agent out of Temple. He played two seasons with the Saints.

He was third on the team in scoring, averaging 12.3 points per game through his first seven games of the season, all starts. He was second on the Gators in minutes, averaging 30.0 per game. He was 25-for-51 from the field (.490 percent), including seven of 16 (.438 percent) from long range.

In a nationally televised game on CBS, Lewis scored 17 points and added five rebounds, two assists and two steals in an 83-79 win over Louisiana State University in 38 minutes.

He was five of 10 from the field, including 0-for-3 from beyond the arc, and seven of nine from the foul line.

Andrews, who starred at Neptune for two seasons before transferring to St. Rose, averaged 4.0 points, 1.0 rebounds and 15.5 minutes per game as a reserve through her first two games of the season for the Leopards as a reserve. She was four of 10 from the field, including 0-for-3 from downtown.

Andrews added one assist and one block.