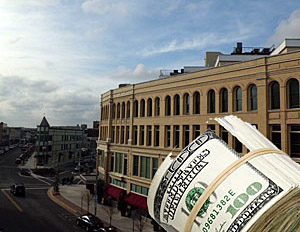 At least $2 million in court fines, payments in place of taxes, and special event fees is owed to Asbury Park – money that should have been collected long ago, according to one city councilman.

“The past administration did a terrible job collecting this money and every taxpayer suffers,” Councilman John Moor said at the Jan. 29 City Council meeting.

Moor said the current council has “inherited major mistakes” regarding money owed to the city and, if it was collected last year, it could have been applied to the 2014 municipal budget. He estimates the money owed equals about 50 cents on the municipal tax rate.

“Nobody seems worried about taxpayer’s rights. I want it corrected as soon as possible. If sound fiscal policies were in place and acted upon all of this money would be in place already. Nobody has been looking at the financial end of things and whoever was at the wheel was sound asleep,” he said.

Moor said that about $1.25 million is owed to the municipal court from outstanding fines.

“These fines go back a number of years and this problem should have been addressed a year ago. To me it’s outrageous that this has not been addressed in an expedited fashion,” he said.

Moor said that in a 2013 Memorandum of Understanding (MOU) with the state, a requirement to receive state transitional aid, says that the city has delinquent court receivables that have gone uncollected for years.

“The municipality shall work with the (state) to contract out the collection of certain court receivables no later than June 1, 2012,” the MOU said.

Moor said the 2012 date was either a typo or a carry over of the same issue from a previous MOU.

Also, downtown redeveloper Carter Sackman, president of Sackman Enterprises, owes about $500,0000 to $750,000 under a payment in place of taxes agreement that is five years past due. The payment is overdue for the Steinbach’s building and on the company’s 550 Cookman Avenue building.

“I can’t blame this on anybody but the past administration. But I don’t care whose fault it is, let’s just get the money owed to us,” he said.

“How much farther back it goes and how much is owed from previous years, I just don’t know but we should be looking diligently to collect this money,” Moor said.

He said it is his understanding that state law requires such event fees to be paid up-front, in advance of the event.

Moor also said that leases for concessions at the city transportation center expired in 2012 and were never renewed.

The leases called for the concessions to pay for their own utilities but that was never enforced, Moor said.

“So the taxpayers have been picking up that bill as well,” he said.

Moor also said that the 2013 MOU with the state requires the sale of surplus property, like the old firehouse on Park Avenue, to increase revenues.

“We are just dragging our feet on selling it,” he said.